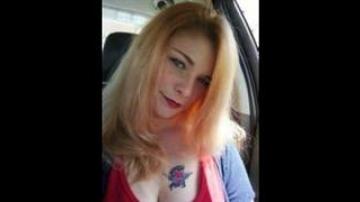 MISHAWAKA, Ind. – Barbra Sheppard, a 33-year-old mother of two was found dead in the alleyway next to the building where she worked early Friday morning.

According to the St. Joseph County Homicide Unit, Sheppard was stabbed multiple times in the neck.

“I’m still waiting to wake up from this bad dream,” the victim’s boyfriend, Jason Leyba said. He found Sheppard’s body just outside Low Bob’s Discount Tobacco Shop near the intersection of Lincolnway East and Byrkit Avenue.

Leyba said she was face down in the dark alley, “When I rolled her over onto my lap and looked at her, I tried to brush her hair off of her face and she had leaves and the amount of blood was just unreal.”

Sheppard always called before she left work, Leyba said. Her shift at the tobacco shop ended at eight o’clock Thursday night, as expected Leyba got a call from his girlfriend right after 8 p.m. but his phone only rang twice.

“I didn’t get to the phone in time,” he said, “I tried redialing and calling her back immediately after she had called and there was no answer.”

After several of his calls went unanswered, Leyba said he called the store; one of victim’s coworkers told him Sheppard had just left ten minutes ago.

An hour later, Leyba said he called the Mishawaka dispatch to see if any accidents had been reported, then he called the local hospitals, still no sign of Sheppard. That’s when he called police to report his girlfriend missing.

Leyba said he could not go to look for her because he was watching Sheppard’s two boys, just ten and three-years-old.

Sheppard’s mother got to the house after midnight, Leyba said the two anxiously paced back and forth, “And we waited around, still no Barbara.”

Around 2 a.m. Leyba left the two kids with their grandmother and went out to look for Sheppard. He said he thought for sure she had left work, but something made him go out there.

At the end of the lot, Leyba saw his girlfriend’s car so he ventured into the alley the car faced, “I seen a pile and at first I wanted to believe it was leaves, then I took a second glance and I seen legs and Barbara’s feet.”

Leyba said he tore of his gloves to find a pulse, but it was too late Sheppard was dead and he called 9-1-1 to report the murder around 2:15 a.m. Friday.

At first, many thought this was a robbery that turned deadly, but Leyba said his girlfriend’s purse and wallet were not taken.

He said the driver’s side door was unlocked and Sheppard’s purse was on the front seat. Leyba said it looked like his girlfriend was about to get into her car when someone attacked her.

“Her t-shirt was ripped, like where she had been grabbed, but I don’t know what they could have wanted,” Leyba said.

Sheppard’s boyfriend and ex-husband were both brought in for questioning, Leyba said police took his clothes and cell-phone for evidence but officers did not hold him at the station.

Sheppard’s divorce was finalized on December 13th, ten days before her death. Leyba said they planned to move in together and get married next year.

According to the St. Joseph County Metro Homicide, no one is in custody and there are no suspects as of Friday night.

Both of Sheppard’s children are with their grandmother. Leyba said neither of the kids can understand what happened to their mother, the 10-year-old is disabled and the other boy is only three.