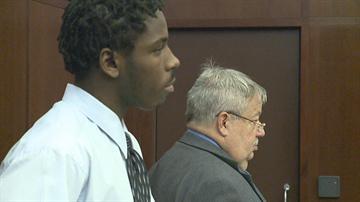 NILES, Mich. – Two women who claim that Martise Washington was a part of plots to blackmail them into sex took the witness stand on the second day of his trial on Wednesday.  Washington,18, is one of five teens charged with coercing the girl into sex by threatening to post a video of her having sex with Washington on Facebook in March.  After Washington and the others were arrested for the sex tape extortion, another girl came forward claiming Washington and Leon Murphy, one of the other teens charged, also blackmailed her into sex by threatening to post nude photos of her on Facebook.

The first victim to testify, a 17-year-old, first detailed what happened on March 14th when Washington allegedly conspired with Trey Nichols, also charged in the case, to record video of her and Washington having sex without her knowledge.  She had met Washington at a basketball game at Niles High School earlier in the year and met up with him and Trey Nichols again in March.  She stated that she willingly had sex with Washington on March 14th but had no idea they were being recorded.  She said she only learned that a sex tape existed when she received a text message from Leon Murphy on March 18th.

“He told me he was watching a video of me,” she explained.

She said Murphy explained to her that he was watching the sex tape, she said she “put two and two together,” and realized she and Washington had been recorded.

“I told him to delete it and be mature about it,” she described.  “That I’d give him money.”

“I didn’t want to and I was scared and I felt like I had no choice,” she explained.

She explained she had sex with Murphy and Washington at the house.  But, Murphy step-father kicked all of them out of the house.  In court, she was asked why she didn’t seek help from Murphy’s step-father.

“Because I didn’t know if he allowed it (the forced sex) and if he would try to do something too,” she explained.
She was then taken to a car and driven around Niles with Washington, Martin and Martel Miller.  She says they continued to force her into sex and laughed at her when she gagged.

“I started crying,” she described.  “I said, ‘I don’t know why or how you can do this to girls.’”
Eventually she said she was allowed to return home.  She explained that she had suicidal thoughts following the incident and was eventually convinced by a friend to report the incident to the Niles Police Department.

The second alleged victim, a 16-year-old girl, said that Leon Murphy had gotten hold of two “dirty” photos she had sent to her friend Eugene Davenport, a friend of Washington’s who also testified on Wednesday.  In February, she claimed Murphy also threatened to post the pictures on Facebook if she refused to have sex with him.  When she arrived at Murphy’s home, she said Washington was there and also demanded sex.  She said she also felt she “didn’t have a choice,” and had sex with both of them.  After it was over she said the boys had her watch TV with them for two hours.

“Then they both fell asleep and took a nap and I just sat there by myself crying,” she described.

But, she didn’t report the incident until she saw news reports of the boy’s arrest for the incident with the other alleged victim.

“I just decided to go on with my life,” she explained.

This, she says, was difficult because Murphy and Washington allegedly spread rumors that she had willingly had sex with them around Niles High School.  She said she was teased by other students, which was only made worse when the boys were arrested and she reported her incident.

“Then after they got arrested, that’s when things really got bad and people found out that I went to the police and told my story and I got harassed a lot,” she explained.

When Davenport, the friend who had received the girl’s photos from her and was also present when the sex tape of the other girl was made, took the stand he described letters from Washington written after his arrest that he claimed asked him to say that victim had been aware the video was recorded.  He said that even though he was a close friend of Washington he couldn’t say that because it was a false statement.

Washington’s trial will continue on Thursday.  In court, Judge Scott Schofield estimated that on Thursday both sides may finish laying out their cases and the jury could begin deliberations.