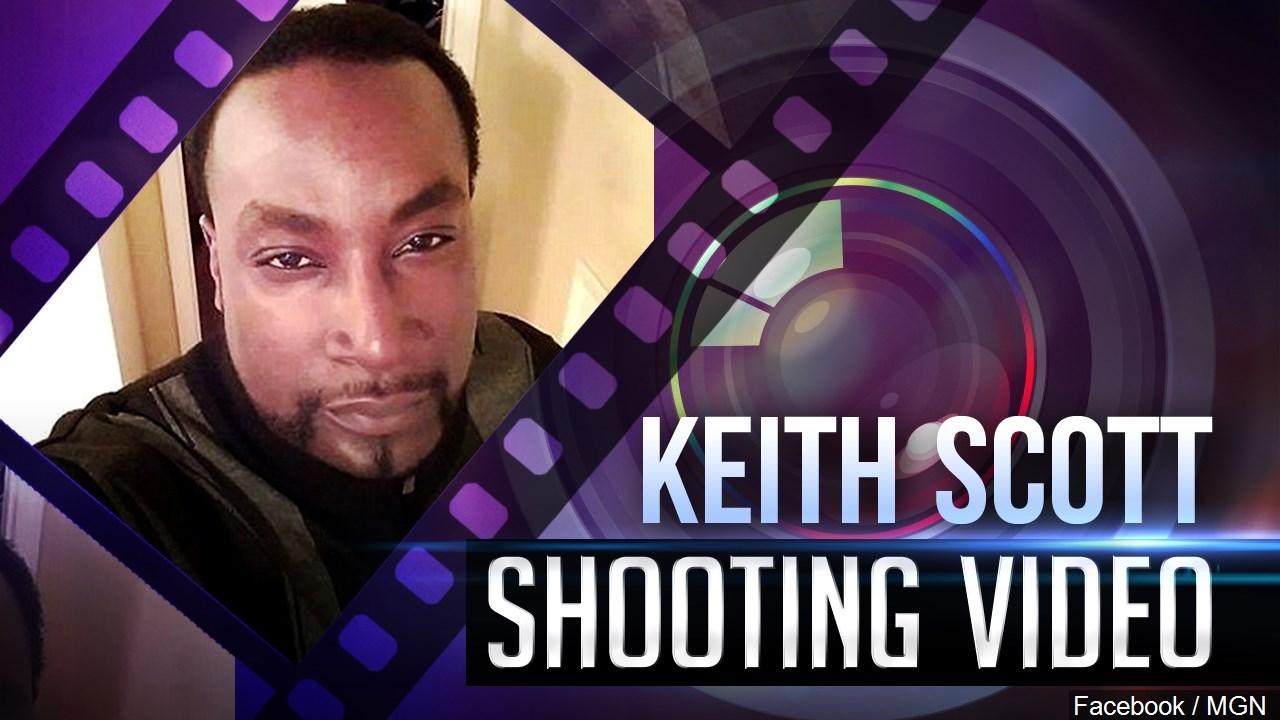 (CNN) -- The family of Keith Lamont Scott has released cell phone video, recorded by his wife, that shows the moments leading to his fatal shooting by police Tuesday in Charlotte, North Carolina.

The video is the first publicly released footage related to the shooting, which spurred days of protests in Charlotte.

"Don't shoot him. He has no weapon," Rakeyia Scott can be heard saying. The first portions of the shaky video appear to show a number of police officers surround a vehicle in a parking lot.

A man repeatedly yells for someone -- apparently Keith Scott -- to "drop the gun."

"He doesn't have a gun. He has a TBI (traumatic brain injury)," Rakeyia Scott says. "He's not going to do anything to you guys. He just took his medicine."

The video shakes, and for a moment, a man in bright blue pants is seen near the surrounded vehicle. Gunshots are heard as Rakeyia Scott says again, "Don't you do it."

Police said an officer shot Scott on Tuesday after he failed to heed commands to drop a gun. His family has said he didn't have a gun.

Curry told CNN that the tape was released because officials would not furnish the police footage to the public.

"We want the public to take a look at this tape and see what was in the video before he was shot, and what was there afterward, and ask how it got there," family attorney Eduardo Curry said.

By TBI, Rakeyia Scott meant traumatic brain injury, Curry said. Scott's family has said that he was in a near-death motorcycle crash last year, and that it left him disabled.

"My understanding (is) that he had had an accident last year that was pretty traumatic, and as a result, made him at least disabled in some particular instances (and was) taking medication for it," Curry said.

The status of other videos -- held by authorities -- has been a point of contention between police and the family.

Police allowed the family to see the police-held footage on Thursday, but the public has yet to see it.

On Friday, Charlotte-Mecklenberg police Chief Kerr Putney said he expected police videos of the shooting -- from dashboard and officer body cameras -- to be released eventually, when investigators decide that it can be released as part of a package with other information, so that the videos aren't released without context.

That differed from his message a day earlier, when the chief said the public shouldn't expect the videos' release.

Curry said he believes police have a copy of Rakeyia Scott's video. He said that he doesn't expect her to speak publicly soon.

"Give the family a chance to mourn and grieve," Curry said. "At some point we'll revisit (whether she'll speak)."

Hundreds of people protested the shooting in Charlotte over the past three days. Though Thursday night was relatively peaceful, violence rocked the first two nights, with businesses vandalized and one protester shot dead in front of a hotel by what police say was another civilian.

Central to the protests are the differing accounts between police and Scott's family over what led to his death. Authorities said a black police officer fatally shot Scott, a black man and a father of seven, in an apartment complex parking lot as officers looked for another man named in a warrant they were trying to serve.

Police said Scott had a gun as he exited his vehicle, and that Officer Brentley Vinson shot him after Scott did not comply with officers' commands to drop the weapon.

Scott's family has said he was reading a book and waiting for his son to come home from school when the shooting happened. But police said Scott was armed and no book was found at the scene.

What the police videos are said to show

Officials are discussing whether and when to release the police dashboard and body camera videos, Mayor Jennifer Roberts said. One factor affecting the timing, she said, is that investigators want to record witness' accounts, and that they don't want witnesses' recollections altered by what they see on the videos. Vinson was not carrying a body camera, police said.

"When he was shot and killed, Mr. Scott's hands were by his side, and he was slowly walking backward," he said.

Roberts told CNN's Anderson Cooper that the videos did not provide "a very clear picture."

"The gun in question is a small gun, and it was not easy to see with the way the motion was happening," she said.

The family wants police to release the videos immediately to the public, Bamberg said.

Putney has said the video does not provide "definitive visual evidence" that Scott pointed a gun at officers. The investigation has been turned over to the State Bureau of Investigation.

Gov. Pat McCrory said Friday that the SBI has been looking for several days into the deadly encounter between Scott and Charlotte police. Most of the critical witnesses in the shooting have been interviewed by state investigators, the governor said.

Meanwhile, a photo obtained by CNN affiliate WSOC shows the immediate aftermath of the shooting of Scott, a source close to the investigation told CNN.

A black object near the bottom of the photo is a gun found by police at the scene, the source said.

North Carolina recently passed a law that blocks the release of police recordings from body or dashboard cameras with limited exceptions. That law is set to take effect in October.

Roberts said an attorney for the city told her that the law will not affect decisions about whether to release the videos in Scott's killing, because the law was not in effect when the shooting happened.