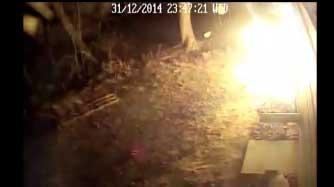 The Benton Harbor Department of Public Safety is asking for the public's help identifying the people responsible for setting fire to AJ's Lounge while 250 people were inside.

The BHDPS has released surveillance video from the incident.

According to the BHDPS, they were called to the night club at 999 Pipestone at 3 a.m. New Year's Day for a structure fire.

BHDPS and staff members from AJs put out the fire.

When investigators reviewed the surveillance video from the building, it captured two men working together to light the fire.

In the video, one of the men can be seen splashing a liquid onto the building while the other man tossed him a shirt to light the fire.

When the fire started, BHDPS says 250 people were inside the building, but all got out safely.

The BHDPS wants the public's help identifying the two men seen in the surveillance video. If you have any information, contact the BHDPS Fire Marshal Steve Johnson at (269) 927-8466.

There is a $500 reward for information leading to the identification and arrest of the men responsible for the arson.