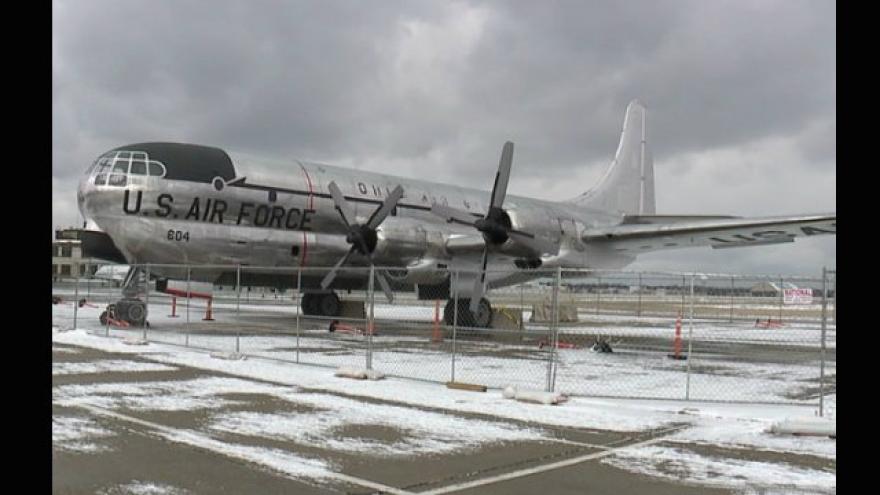 Plans are eventually to build a pad on the south outside of the building where the plane will eventually be converted into a restaurant for the public to enjoy. Photo courtesy WEWS

Cleveland, OH (WEWS) -- A piece of Ohio aviation history will be on display for the first time next week at the I-X Center, that’s when the center’s Boeing KC-97G Stratofreighter will be included as part of the Summit Racing Equipment I-X Piston Powered Auto-Rama March 16-18.

"There are very few of these around the world and as a matter of fact there's only one of these planes in the whole world flying," said show manager Steve Legerski.

The 1953 aircraft that saw duty in the Ohio National Guard in the 1960s was acquired by the I-X Center last year after it sat for nearly 40 years at the Military Aircraft Storage and Disposition Center at the Davis-Monthan Air Force Base in Arizona.

It was painstakingly disassembled by a group of former race car mechanics led by former A.J. Foyt Crew Chief William “Tex” Powell and shipped by truck to Cleveland where I-X Center Mechanic Rocco Bevelacqua got to work on the 1:1 scale model.

"I was a nervous wreck, I had never put a plane together before," said Bevelacqua. But he said the instructions written out by Powell made the process much simpler than he thought.

“Let me tell you those guys were awesome, “ he said. “I thought we were going to be up there for four or five months, in actuality, we probably were three and a half weeks and that plane was together.”

To date, 800 hours have been put into the restoration of the outside of the plane to its original state.

Plans are eventually to build a pad on the south outside of the building where the plane will eventually be converted into a restaurant for the public to enjoy making it as much an icon at the I-X Center as the indoor Ferris wheel.

While many know the I-X Center for its conventions and indoor amusement park, its roots were in military construction starting in 1942 as the Cleveland Bomber Plant making B-29 bombers before shifting over to the manufacturing of tanks.

"I think it's a great piece of history in Cleveland, as is the IX Center. I mean there's not too many B-29 assembly plants and tank plants around the world and we're fortunate in Cleveland to have one right here in our backyard."