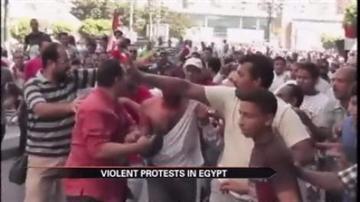 CAIRO — It has proven to be a tense weekend in Egypt from the massive protests against the president, Mohammed Morsi. Protesters gathered for what they are calling a second revolution.

There have been many clashes between supporters and opponents of Morsi.

Liberal opponents say he is trying to impose the Muslim Brotherhood. They have been joined by their once-enemies, the supporters of former president Hosini Mumbarak.

"We are looking to have a better life, more democracy," said anti-Morsi demonstrator Gladis Hadad. "We are not convinced with Mohammed Morsi and we are going to stay on the street until he leaves."

Around 150 people have been wounded since the new wave of protests began on Friday.

Seven people have been killed.