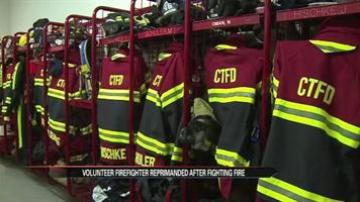 BERRIEN COUNTY, Mich. -- A Berrien County Roads Commission worker is in hot water after failing to show up for work last week, but he says he had a good reason. He was helping battle a house fire that killed three people.

Keith Swain called off work as a snow plow driver because he was fighting the Three Oaks fire that killed four people.

Swain is now being reprimanded for it.

Swain's wife confirmed that he is going through the grievance process to fight the reprimand.

Berrien County Roads Commission Director Louis Csokasy says per the roads commission contract, Swain is not allowed to have a second job, even if it is a job as a volunteer firefighter.

"This issues we have sometimes with our employees our contractual  issues, we believe the contract says one thing they believe the other," said Csokasy.

Csokasy says he understands the seriousness of a raging fire-but he says there is also a safety issue when there is one less driver to keep snow covered roads clear.

"It's really important every employee has a route. When that employee is absent from work, then that route has to be made up and that becomes very difficult particularly in the winter conditions we had this year," said Csokasy.