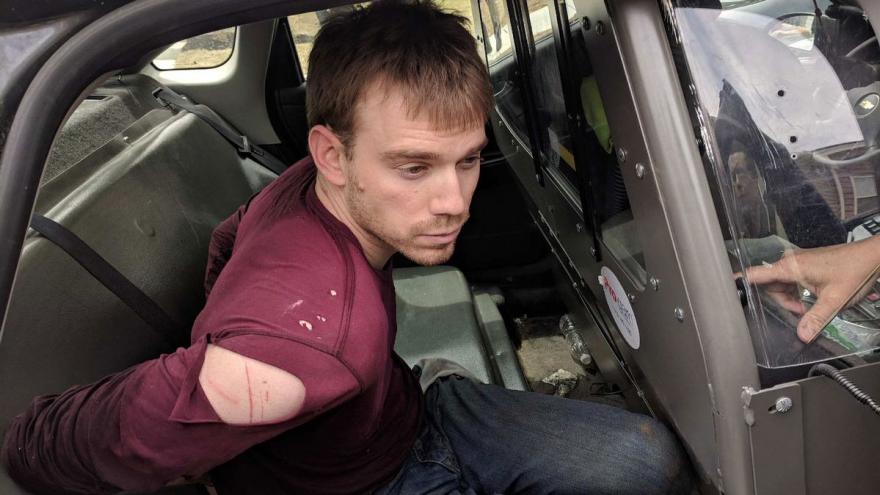 (CNN) -- The gunman accused of killing four people at a Nashville-area Waffle House was arrested Monday after a frantic manhunt, police said.

A tip from the community led to Travis Reinking's arrest shortly after 1 p.m. in a wooded area near his Nashville apartment, Metro Nashville Police said. He was booked into Metro jail Monday night on four counts of criminal homicide. He is scheduled to appear in court Wednesday.

The arrest came roughly 35 hours after Reinking unloaded an assault-style rifle on customers and employees at the Antioch restaurant early Sunday morning. All of those killed were under 30. Two others were injured.

The shooting raised questions about Reinking's previous law enforcement encounters, and whether his father should be charged for giving him guns when he was barred from possessing them.

"Yesterday was a horrible day for the city of Nashville," Mayor David Briley said in a Monday news conference. "Today is a day where we can start to move on as a community."

The shooting set off a cycle of shock, grief and anxiety in the Nashville metropolitan area. Nashville public schools initiated "lock-out" procedures Monday while Reinking was on the loose. Police warned residents to keep their doors locked.

Reinking did not resist when a detective drew a gun on him, Lt. Carlos Lara said. Reinking was carrying a backpack that contained a firearm, ammunition and a flashlight. He declined to give a statement and requested a lawyer, Lara said.

It's not clear what Reinking did during his time on the run. And the motive for the attack remains a mystery.

Reinking arrived at the Waffle House in Antioch, part of the metro Nashville area, just before 3:20 a.m. Sunday.

He sat in his pickup truck for nearly four minutes "looking at people inside the restaurant," police spokesman Don Aaron said.

Wearing only a green jacket, the gunman drew an "assault-type rifle" and fatally shot two people outside the Waffle House, police said. He continued his rampage inside the restaurant, killing two more people.

The carnage stopped when a customer monitoring the gunman's moves from afar jumped into action when he saw an opportunity.

James Shaw Jr. said he seized a moment of opportunity when the gunman had stopped firing. He charged at the shooter and the two tussled for a bit before Shaw managed to wrestle the firearm away. Shaw tossed it over the counter, and the gunman fled, he said.

"I was like 'I have to go now because if I don't go now then I'm not going to have have another window of opportunity," he said.

Shaw denied that he was a hero. He visited two survivors of the attack in the hospital on Monday and started a GoFundMe account to assist victims of the shooting, a spokeswoman for the fundraising platform told CNN.

"Heroes seem kind of like they're not touchable," he said. "If I'm looked at as a regular person, if somebody else is in this situation they have that same thing within them that they can project out also."

What we know about the suspect
Reinking is from Morton, Illinois, and police believe he moved to the Nashville area last fall. He worked in construction but was fired from a job about three weeks ago, police said. Reinking started with another construction company last Monday, but did not show up for work Tuesday.

The 29-year-old has a history of delusions and run-ins with the law.

In May 2016, Reinking told first responders that he believed pop star Taylor Swift was stalking him, according to a police report. Reinking's family also told police he made comments about killing himself.

Last summer, Reinking was arrested by the Secret Service for trespassing near the White House.

Reinking said he wanted to meet with US President Donald Trump. He told a Secret Service officer at the northeast entrance that he was a "sovereign citizen" who had a "right to inspect the grounds," according to a Metropolitan Police Department incident report dated July 7, 2017.

He was charged with unlawful entry, but the charges were dismissed after he completed community service. At the FBI's request, Reinking's Illinois firearms authorization was revoked, and four weapons -- including the AR-15 style rifle used in Sunday's shooting -- were seized.

After the firearms seizure, Reinking was legally prohibited from possessing guns, Matthew Espenshade, an FBI agent located in Nashville, said Monday. Authorities in Tazewell County, Illinois, gave the weapons to Reinking's father, who police believe later returned them to his son.

Police said that Reinking visited a car dealership in the Nashville suburb of Brentwood last week and somehow obtained a key fob for a 2018 BMW X6 without providing identification. He stole the car and led police on a brief chase, Brentwood Police said.

Using the car's GPS, officers tracked the car to Reinking's apartment complex and recovered it. Because they didn't know the thief's identity, no one was arrested.

Waffle House employee Taurean C. Sanderlin, 29, of nearby Goodlettsville, and customer Joe R. Perez, 20, of Nashville, were shot outside the restaurant:

Inside, the gunman killed 23-year-old Akilah DaSilva of Antioch and 21-year-old DeEbony Groves of nearby Gallatin.

DaSilva's cousin said the world lost a talented young man who excelled in computer science and music -- a hard worker who never gave up and was quick to learn. "

"He was a genius. He was super smart. Smarter than me," Kareem DaSilva said. "He was very impressive."