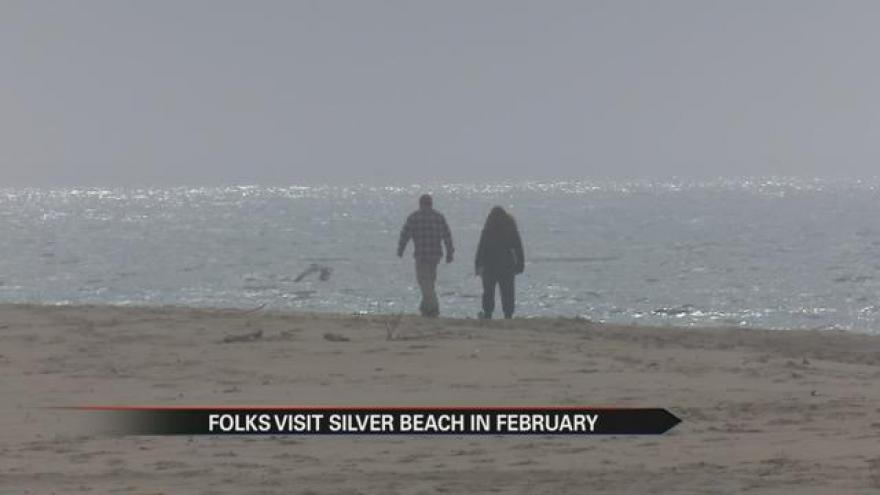 “I generally enjoy winter, but it’s nice to be outside with the kids.” St. Joe resident Alison Sahs said.

If sunshine is the best medicine, then there were some very healthy people spending their Wednesday morning at Silver Beach.

“It’s beautiful weather,” Benton Harbor resident Stephen Pugh said. “I wish it would stay like this.”

“I think it’s very unusual!” Sahs said. “I think this is our first park date at the beach in February.”

Sahs and George brought their kids to the playground at Silver Beach, where they ran around and played in the sand.

Nearby, St. Joe resident Jim Bartley was spending his morning reliving his vacation, and sporting shorts while doing it.

“We just got back from Florida and we spent two weeks walking on Fort Meyers Beach,” Bartley said. “So, it was 56 out [today], why not?”

And why not enjoy a Michigan beach in the middle of winter?

The warm weather was a pleasant surprise for Jenny Quarters, who’s visiting from New York.

“I was expecting snowstorms,” she said. “We’re here for a week, so, to have the nice weather, it’s nice to get the kids down here and play.”

A dense fog rolled into Silver Beach late Wednesday morning, leaving the lake, the lighthouse and the pier completely out of view for a time.

Fishing in February is also not normal along Lake Michigan, but Hoge said he’s been out on the pier all week long looking for a big catch.

While he wasn’t trying to catch divers from the Berrien County Sheriff’s Department – who were taking a dip in the 41-degree water – Hoge said fog or no fog, getting to fish this time of year is not bad.

“This past week, this past – so far, this year for the winter has just been phenomenal,” he said. “I haven’t had to shovel much snow.”