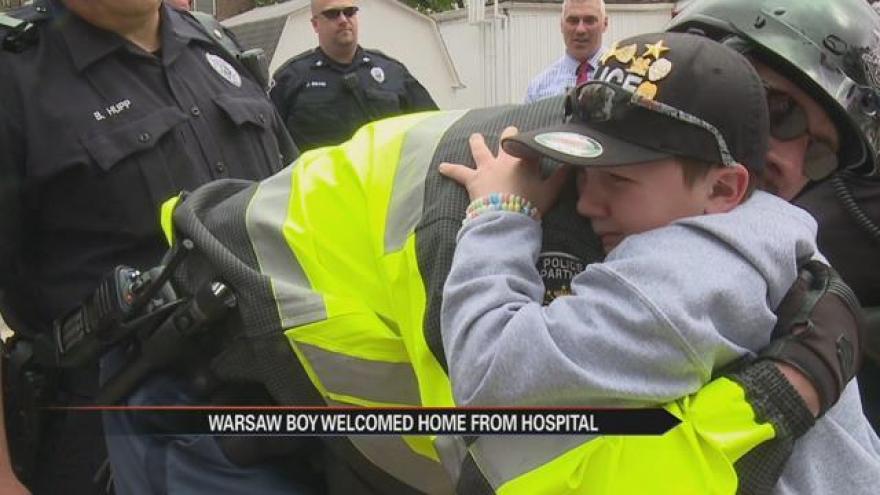 An 11-year-old from Warsaw recovering from a brain tumor was discharged from Riley Children’s Hospital in Indianapolis Thursday morning.

Law enforcement escorted Drake Price from the hospital to his home with squad cars from several local agencies.

Price, a 4th grader at Lincoln Elementary, has always wanted to be a police officer.

In late February, doctors discovered Drake had a brain tumor the size of a baseball. Three days later, he was in surgery.

During the last two months while recovering in the hospital, Warsaw Police learned of Drake’s aspirations to be an officer.

They rallied around him, making him an honorary officer. Other agencies across the world joined in, sending him police patches and other gifts.

Healed enough to head home to finish recovering, Drake was welcomed by hundreds of people in Warsaw on Thursday afternoon. His new brothers in blue escorted him through the town.

“We felt that we wanted to show him that he’s got all over us behind him and we’re excited to have him home. We’re grateful that he was able to make the trip home with us today,” says Officer Roy Navarro, Warsaw Police Department.

Classmates at Lincoln Elementary and other local schools waited outside to wave to him as he rode by chanting “Drake Strong.”

“We’re just overwhelmed by the support and love and prayers the whole town of Warsaw, and not only Warsaw but the whole world has given us during this time,” says Drake’s mom Charity Price.

Drake’s parents say it means a lot to all of them to see how much the community cares.

“I was in tears the whole way through town. From the bottom of our hearts, you don’t know how special this is. Not only to him but to all of us,” says Drake’s dad Miles Price.