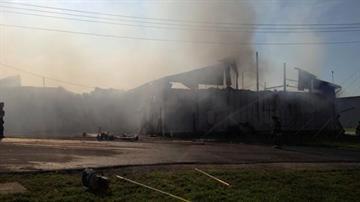 The owner of the company, George Pendry, was inside the building with several other employees when the fire started around 7:30 a.m.

"Fifteen years of hard work. I started it in my house in my garage 15 years ago and I built it up to this and its quite disturbing," said Pendry.

He said he got his employees and car parts out of the building before the fire spread.

"We were running a shift, there was 15 of us in there," said Pendry.

Pendry says he tried to save the building.

"I told everybody to get out. It was an electrical fire in the ceiling. It's an old building so it spread quite quickly, we made one small attempt to put it out and that was it," said Pendry.

Chad Hill of the Kosciusko County Sheriff's Department was on scene during the fire. He said it spread quickly.

"It was fully involved. The fire began to increase, consume the building primarily becaise it was a wood structure covered by metal," said Hill.

Pendry says he was in disbelief as he watched flames consume his factory. He says he hopes to rebuild.

"I don't know if I have it in me to do it again, but we are going to try," said Pendry.