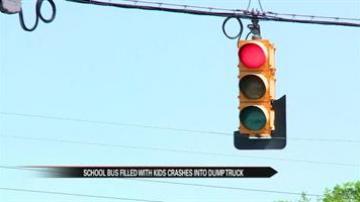 SYRCAUSE, Ind.-- A school field trip turned scary Wednesday for a bus full of Wawasee middle school students, and an initial police report says the bus driver was at fault.

Forty-seven students and two adults were headed to a water park in Valparaiso when the school bus drove straight through a red light and slammed into a dump truck.

“The police had everything shut down in the area and half the kids were still on the bus when I got there,” said Vinnie Carnegie, owner of Carnegie Towing.

Carnegie has 8 kids, so he felt for the panicked parents that quickly arrived at the accident scene.

“I would have probably panicked too,” said Carnegie. “I mean some of the parents did panic. One guy showed up there- he was kind of upset a little bit.”

School officials also quickly arrived on scene, moved the students, and put them on another bus headed back to the middle school.

“We had our nurse from the high school and our nurse from the middle school who were there- and they actually talked with each student who was on the bus,” said Joy Goshert, director of curriculum and instruction, Wawasee School Corporation. “And there were some parents that we contacted to take them for some evaluation as well.”

The triple-axle dump truck was totaled and is parked behind Carnegie Towing.

The school bus is sitting at Wiers International in Plymouth.

As for the fate of the bus driver, 59 year old Patricia Myers, the school corporation is waiting on a final police report.

“We won’t begin to make any of those decisions until we have an official report back. She is not driving until the investigation is taking place,” said Goshert.

The driver of the dump truck says he’s expecting the school corporation to cover his medical bills, plus the cost to replace his truck.

We called the hme of the school bus driver, but she didn't answer the phone.

She was treated at the hospital for arm pain.