Weather causes massive pileup on I-94 near Michigan City 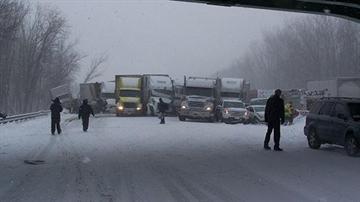 LAPORTE COUNTY, Ind. -- At least three people are dead tonight, and over 20 injured, after a multi car pile up on I-94.

It happened around 3:00pm Thursday afternoon.  Officials say severe weather was to blame, at the time of the crash, a powerful lake effect snow band was dumping several inches of snow onto the area, and visibility was next to nothing.

Officials say over 30 cars were involved in the pile up.

"It sounded like a train coming off the rails, it's a mega disaster, this is beyond anything I've ever seen," says Tyler Cobb, who heard the whole accident.

Eastbound traffic is being routed onto SR49 (Chesterton Exit) in Porter County.

All westbound lanes are open except for one lane which is being used by emergency responders.