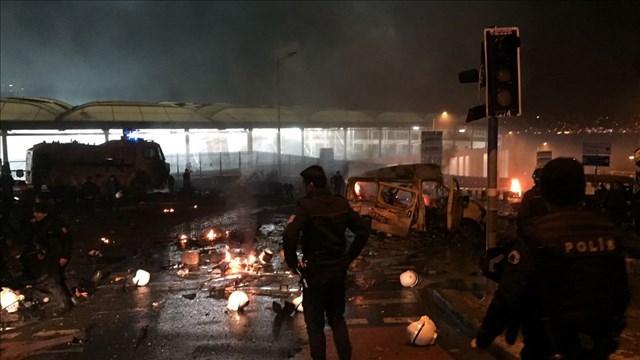 (CNN) -- Throughout 2016, terror attacks have ripped apart small towns and big cities in the Middle East, Africa and Europe. This weekend brought no respite.

Different groups claimed responsibility for two of the attacks, carrying them out in the name of different political and religious causes.

In each of the three explosions, ordinary people paid the ultimate price, casualties of ongoing battles where there is no front line, no readily apparent uniform that denotes the combatants as friend or foe, and little anyone can do to ensure security.

By now, the message clear: No place is truly safe, whether it's a church, a park, a school or a busy street.

When and where? Late Saturday night, December 10, after a heavily attended soccer game at Besiktas Vodafone Arena.

What happened? Two blasts about a mile apart killed at least 44 people, most of them police officers, and wounded 150. A remote control detonated a car bomb in the first explosion and a suicide bomber caused the second.

Why? The Kurdish Freedom Hawks (TAK), a breakaway group of the Kurdistan Workers Party (PKK), claimed responsibility on its website. The group, which is known to target the military and police, said the Turkish people were not the target of the attack. But the group inevitably ensnares innocent bystanders through its modus operandi, CNN military analyst Rick Francona said.

TAK goes after government agents in locations where it knows they will find them, such as stadiums or public gatherings where they assemble to do their jobs. "We know they're responsible for a litany of violence against the Turkish government so it's not surprising that they're involved," he said. "What we're seeing is this continuation of tactics of going against the government."

The attack will only make things worse for Kurds in Turkey, Francona said. President Recep Tayyip Erdogan has identified the PKK as an immediate danger to Turkey since the July 15 failed coup.

Erdogan has enacted emergency laws to close down pro-Kurdish media outlets, dismissed or suspended more than 11,000 teachers over alleged PKK connections, and he has selected at least 24 government appointees to replace Peoples' Democratic Party, or HDP, mayors, including in the Kurdish-majority city Diyarbakir, according to Fadi Hakura of the Turkey Project at London-based Chatham House.

When and where? During Sunday morning mass at Cairo's main Coptic house of worship, at St. Mark's Coptic Orthodox Cathedral.

What happened? A bomb ripped through a section of the church for women, killing at least 25 and injuring dozens more. President Abdel Fattah El Sisi condemned the attack and declared a three-day period of national mourning.

Why? No group claimed immediate responsibility for the attacks. Coptic Christians, who make up about 10 percent of Egypt's 91 million residents, have been the targets of discrimination and violence attack since Hosni Mubarak's ouster in 2011.

When and where? Sunday morning around 7:30 a.m. in Mogadishu, the nation's largest city and capital.

What happened? A car bomb filled with explosives rammed into the main entrance of a port, killing at least 20 people and injuring 15, most of whom were port employees and pedestrians.

Why? The attack targeted police officers in the port's customs and tax office, a police official said, apparently missing its target. Al Shabaab, a Somalia-based militant group with ties to al Qaeda, claimed responsibility for killing 30 officers in the attack. CNN was unable to confirm the claim but the attack bears the group's hallmarks of detonating vehicles filled with explosives in busy areas. This year alone, the group claimed responsibility for a truck bomb that exploded outside the Somali presidential palace and a popular hotel in Mogadishu, killing 15; and a pair of suicide car bombings that struck a government building, killing 23 people, including rescuers.

Al-Shabaab means "the Youth" in Arabic. It wants to turn Somalia into an Islamist state, complete with a strict form of Sharia. They've even recruited some Americans from Minnesota's Somali-American community.