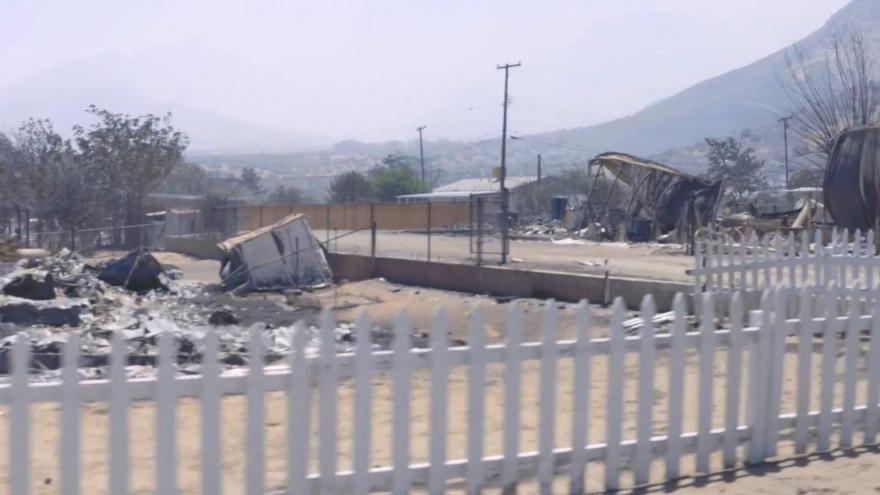 (CNN) -- David Ross said his family moved valuables upstairs when the floodwaters started coming through the floor grates in his house.

"We ran out of time," Ross told CNN on Saturday. "We couldn't get everything up, and when the water started coming into the house, it didn't stop until we had almost four feet of water on my main floor, and it's never been that way."

Ross said the flooding was the worst he's seen in his 39 years in West Virginia.

Rescue crews worked steadily on Saturday to answer emergency calls from residents stranded by fast-moving floodwaters that state officials say have killed at least 24 people. It's the nation's highest death toll from flash floods since May 2010, when 27 people died in Tennessee, Kentucky and Mississippi.

Heavy rain battered much of West Virginia earlier this week, with as much as 10 inches of rain falling in a brief period Thursday. Water poured out of creeks and rivers, prompting scores of rescue calls.

The high waters were receding Saturday, but officials, such as those in Kanawha County, are warning people to watch out for "flood debris, downed power lines and downed trees." CNN meteorologists said no more rain is expected until Monday.

Along with responding to rescue emergencies, Kanawha County Sheriff's Office spokesman Brian Humphreys said deputies were going to pharmacies to get medications for people affected by the flooding.

Tomblin already activated 200 National Guard members to assist in eight counties and has authorization to activate as many as 300 more, if needed.

The governor declared states of emergency in 44 counties Thursday night. Eleven remaining counties, located in the northern and eastern panhandles, were excluded from the emergency declaration. The communities of Elkview, Clendenin and Frame, located in Kanawha County, were particularly hard hit.

The West Virginia Division of Homeland Security and Emergency Management (DHSEM) reported 23 deaths, including 15 in Greenbrier County; six in Kanawha County, which includes the capital, Charleston; and one each in Jackson and Ohio counties.

At least two children were killed in the deluge, including a 4-year-old boy who was washed away by floodwaters in Jackson County, officials said.

Homes and infrastructure across the state have been severely damaged or washed away. High terrain along rivers speeded the rapid floodwaters. As of 6:30 a.m., there were 158 emergency rescue calls in Kanawha County, located in the southwestern part of the state, the sheriff's office said.

In that same county, nearly 500 people were stranded at the Elkview Crossings Mall in Elkview for more than 24 hours starting on Thursday, when rain washed out an access road, officials said. More than 32,000 customers are without power, the DHSEM said.

Friday night, emergency workers finished building a temporary gravel road to allow all those stranded to exit, according to the West Virginia Division of Homeland Security and Emergency Management.

Chad Agner, 26, said he saw homes and cars swept away in White Sulphur Springs in the southeastern part of the state.

Others saw a home that burned as it floated down Howard's Creek, having been washed away by floodwaters in the same Greenbrier County town.

"The house in front of where my apartment used to be is turned over. Some houses are totally gone," Agner told CNN. "My apartment is gone."

Weather radar estimates show that more than 10 inches of rain have fallen in portions of Greenbrier County. There is a 1 in 1,000 chance of this type of rainfall happening in any given year, according to the National Weather Service.

In Kanawha County, the Elkview River crested at 33.37 feet Friday morning, meteorologists said. The river rose more than 27 feet from Thursday afternoon to Friday morning, the highest crest since record-keeping began more than 125 years ago, according to the National Weather Service.

Also in White Sulphur Springs, the storms severely impacted The Greenbrier, a luxury resort that was scheduled to host the PGA Tour's Greenbrier Classic July 7-10.

The PGA announced Saturday that the tournament is canceled because the course was badly damaged.

"We are heartbroken by the devastation the residents of West Virginia are experiencing at this time and the reports of lives lost due to the terrible flooding," said PGA Tour Commissioner Tim Finchem.

Professional PGA golfer Bubba Watson, who was at the resort when the storms hit, shared a photo and video on his Twitter account showing the grounds covered in fast-moving brown water.

Resort owner Jim Justice released a statement saying that their focus is on helping the people, not "the property, the golf course, or anything else."