What happens after a plane crashes into your house? 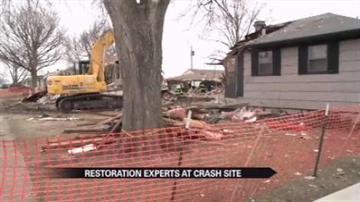 SOUTH BEND, Ind. -- Investigators are sifting through the remains of three homes on North Iowa Street for pieces of airplane that may have been left behind during the recovery of the plane wreckage. What happens to those homes now?

He says it's traumatic when your home is destroyed by a fire, tornado or in this case, a plane crash.

"It just leaves everybody in chaos; it's a very rough thing to go through,” said Gabrielson.

Gabrielson says there is no easy road to recovery.

"Everybody's insurance company is different, and your policy could be different, so until you know that, it's a long process,” said Gabrielson.

That process will be a little longer for these homeowners because the National Transportation Safety Board is combing through the rubble to make sure they have every piece of plane wreckage.

"With the plane being down and the federal government being involved with this now, everything is kind of on hold,” said Gabrielson.

But the NTSB isn't the only obstacle to a quick recovery for these residents.

"When you start getting into whether jet fuel's involved or anything else, then the EPA's involved too; so you have to have the right people,” said Gabrielson.

Gabrielson says the right people are in the area, but you have to seek them out.

Gabrielson says psychologically, it can be difficult not only for the owners of the damaged homes, but also the residents of the neighborhood.
The visible damage is a reminder of what happened so close to home.