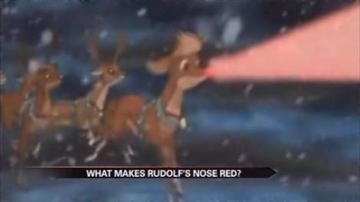 He's the most renowned of reindeer, all because of  that shiny, red nose.

Now an international team of scientists are trying to find out just what makes Rudolf's nose glow.

They've discovered that reindeer have lots of vessels pumping blood to their snouts to keep them cozy in the icy north and that is why Rudolf's nose is red.

That raises the question, why don't the other reindeer have red noses?

"It could be that Rudolph is at the front of the sleigh - in the direct line of air turbulence, so he would need to keep his nose warmer than the rest of the reindeer," said Dr. John Cullen, Department of Surgery, University of Rochester.

Many say it's red because of Santa's magic.