What the Supreme Court has said about flag burning 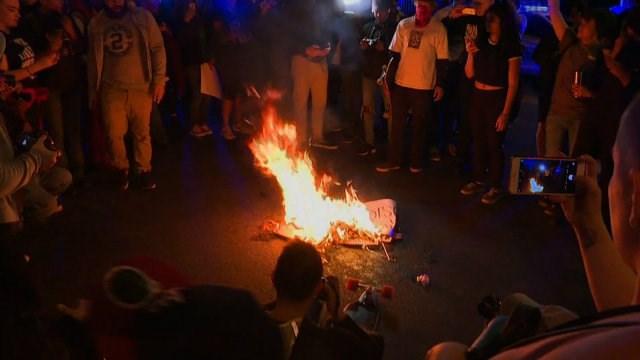 WASHINGTON (CNN) -- President-elect Donald Trump might not be a fan of burning the American flag, but neither he nor Congress can criminalize it, the Supreme Court has ruled twice.

Trump tweeted Tuesday morning that he would support substantial penalties -- including revoking an American's citizenship -- for burning the US flag, restarting a controversy that has persisted despite decades of settled case law.

The Supreme Court has ruled twice that destruction of the American flag is protected by the Constitution, specifically the First Amendment's protection of free speech, even if the act is unsettling.

One of the staunchest defenders of the decisions, and a key vote in favor of both, was conservative Supreme Court Justice Antonin Scalia, who was widely praised by Republicans after his death in February, including by Trump.

Scalia spoke about the matter in a 2012 interview with CNN, saying that while he does not approve of flag burning, it is fundamentally protected by the Constitution and the Founding Fathers' efforts to create a government not ruled by tyranny.

"If I were king, I would not allow people to go around burning the American flag. However, we have a First Amendment, which says that the right of free speech shall not be abridged -- and it is addressed in particular to speech critical of the government," Scalia said. "That was the main kind of speech that tyrants would seek to suppress."

The cases were Texas v. Johnson in 1989, and US v. Eichman in 1990. The former case stemmed from a flag burning protest at the 1984 Republican National Convention and a Texas law banning desecration of a venerated object, and the latter responded to a bill from Congress that made harming the flag illegal.

In both cases, the Supreme Court ruled that burning a flag is an act of expression and "symbolic speech," and exactly they type of action that the First Amendment was designed to protect.

While politicians have continued to introduce bills and proposed constitutional amendments to ban flag burning, they have failed to advance, in large part because of the First Amendment issue.

Senate Majority Leader Mitch McConnell, himself a staunch Republican who will continue to lead the Senate in Trump's administration next year, opposed banning flag burning in a 2006 op-ed in his home state of Kentucky. He wrote that even if harming the flag is "offensive," the answer is "more freedom, not less."

In his tweet on Monday, Trump went farther than saying flag burning should be penalized -- he said it should amount to losing American citizenship.

"Nobody should be allowed to burn the American flag -- if they do, there must be consequences -- perhaps loss of citizenship or year in jail!" he wrote.

Punishment for flag desecration itself is outlawed by the Constitution, but stripping citizenship would also be a heavy lift, legally.

The Constitution provides citizenship to all people born in the US automatically, and also provides for people to become "naturalized" citizens if they were not born here.

The law is different for the two types of citizenship. For a naturalized citizen, the order granting citizenship can be revoked, but the law provides for it only if the citizenship was "illegally procured" or obtained through misrepresentation.

For citizens by birth and naturalization, there is a law that provides for the removal of citizenship for "voluntarily performing" certain actions "with the intention of relinquishing United States nationality." Those actions include a formal request to relinquish citizenship, serving in a foreign military that is hostile to the US, and being convicted of treason.

Those laws could be changed by an act of Congress, but would still need to survive a court challenge to their constitutionality if flag burning were included.

The Supreme Court held in Vance v. Terrazas and, earlier, in Afroyim v. Rusk, that for the law to penalize certain actions with loss of citizenship, those actions must be done voluntarily and with the intent to give up citizenship.