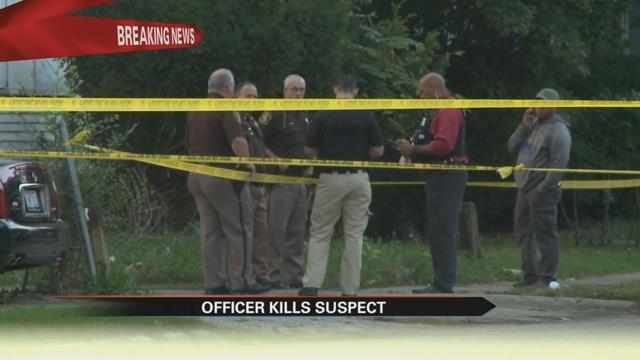 What we know about the deadly officer-involved shooting that happened in Benton Harbor Tuesday morning.

“We believe in full disclosure, and at some point, once we’ve gotten with the family and taken care of the investigation, we will be releasing videos and the audio from the county,” Benton Harbor Department of Public Safety Director Dan McGinnis said in a press conference Tuesday morning.

He promised full disclosure after a shooting between police and an armed suspect turned deadly.

Police got a call of a person being held at gunpoint inside a home on Pavone Street in Benton Harbor at 2:12 a.m. Tuesday.

Four officers responded to the call, but McGinnis said they quickly learned there was no actual threat.

According to McGinnis, the people inside the home cooperated fully, allowing the officers to search the house, and they informed police that they had not called 911.

“Upon determining that there was nothing of trouble in the house, the officers, with the homeowner, go back outside on the front porch, ultimately on the front steps,” McGinnis said. “As one of our officer’s is getting [the homeowner’s] name and information, shots ring out from the south on Pavone Street, coming from the area of Broadway Park.”

Police say the suspect, who was allegedly riding a bike toward the house, fired four or five shots before one of the officers shot back with a police-issued high-power rifle.

“[The] officer then engages the subject as he’s shooting at the house on Pavone Street,” McGinnis said. “More shots ring out, a couple more shots. We also shoot, hitting the subject, and subsequently, he died from his injuries.”

Police have not confirmed the identity of the suspect, but family members and friends tell ABC57 his name is Darius Wimberly, known locally as “Karate.”

“The gun that he was shooting was totally expelled of all rounds,” McGinnis said, of Wimberly. “In addition, there was a second firearm in the pocket in his left leg. Those were confiscated and kept as evidence.”

Police say they have reason to believe Wimberly was targeting someone inside the home on Pavone Street, and the person who initially called 911 knew he was coming.

Wimberly’s brother joined dozens of friends and family at the scene Tuesday morning.

“Never in a million years did I think that it would happen to our family,” Antwon Johnson said.

The officer placed on administrative leave fired 15 shots in Wimberly’s direction, according to police. He has only been a cop in Benton Harbor for 11 months, and was previously a firefighter in the city.

Police did not reveal the officer’s name, but they said he is white, and Wimberly was black. But police say Pavone Street is so dark at night, due to a low number of street lights, that the officer could not have known what skin color the suspect was.

Michigan State Police have taken over the investigation, and body camera footage from the three officers who were outfitted with them is expected to be made public soon.