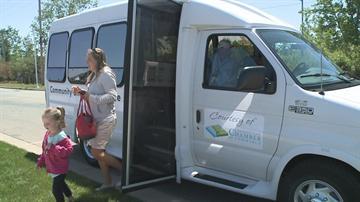 BENTON HARBOR, Mich. - Crowds are finally flowing into Harbor Shores Golf Club for the Senior PGA Championship and  a group is putting in time to keep tourism dollars local.

The Community Showcase Committee, a planning group formed by the Cornerstone Chamber of Commerce, has been putting together an action plan for months.

“It’s been ongoing for several months,” said Susan Cox with the committee.

Tuesday Cox and several other volunteers ran a concierge service at the Information Desk inside the ropes. They donned several binders for ticketholders to scope out.

“It lists every city in Berrien County,” said Cox. She said the masses are asking about directions on and off the course. “We’re here to let them know all the amenities our area has to offer.”

The binders list hotels, stores and restaurants from every surrounding city.

The plan worked on a young mother Angie Youngstedt and her 4-year-ol daughter Greta. They got a hot dog in St. Joe and visited the Arts District in Benton Harbor. “We are going to stop on the way back and get some gelato too in downtown Benton Harbor,” she said.

As the crowds thicken later in the week hopes are more people catch on and the area treats them as well as they treat it.

“(We hope) the experience that all the SPGA ticket holders have is as good outside of the ropes as it is inside the ropes,” said Cox.