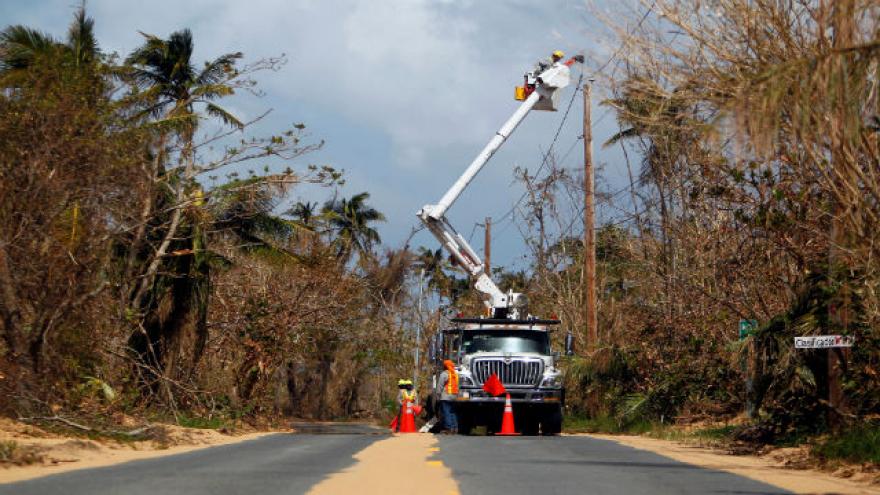 (CNN) -- Whitefish Energy is stopping its work to restore Puerto Rico's broken electricity grid because the company says it is owed more than $83 million by the island's power authority.

Whitefish CEO Andy Techmanski told CNN in an exclusive interview that repeated requests for agreed payments were not met and there was no choice but to suspend work.

He claimed credit for the restoration of transmission lines by his contractors, even after his company's controversial contract with the Puerto Rico Electric Power Authority (PREPA) was set to be voided.

"We stopped because of the financial situation, lack of payment with PREPA has gotten beyond its maximum threshold and what we can sustain as a business," he said.

A letter sent by Whitefish to PREPA and seen by CNN accuses PREPA of delaying payments. As of Sunday, Whitefish said $83,036,305.09 was outstanding, including more than $26 million that it said had been audited and approved by PREPA already. Without payment to Whitefish, contractors and subcontractors were also going unpaid, the letter said.

According to the company, its work in Puerto Rico has involved more than 500 contractors and subcontractors.

"It may have not been the best business decision coming to work for a bankrupt island," Techmanski told CNN. "We were assured PREPA was getting support from FEMA and there was money available to pay us for 100% of our work."

CNN contacted PREPA for comment and a spokeswoman responded but did not directly address the Whitefish Energy situation.

"The Whitefish contract is under investigation by the state and federal authorities," spokeswoman Odalys de Jesus told CNN. "We will not give more information or statements until the investigation process ends. The reason is to prevent the process from being affected."

PREPA, $9 billion in debt before Hurricane Maria, came under fire and derision after it emerged the agency signed a $300 million contract with Whitefish, a young company with just two full-time employees when the storm smashed the island's power grid. FEMA said it would never have supported the contract. There were also concerns about how Whitefish approached Puerto Rican authorities and how both Techmanski and Interior Secretary Ryan Zinke are from the same small Montana town.

CNN reported in October that the FBI was investigating the Whitefish contract and last week a congressional committee heard that PREPA ignored its own legal advice before signing the deal.

Last week, Rosselló celebrated getting the power grid back to 50% generation, but that does not mean half of customers have power. A CNN investigation earlier this month found entire communities had had no power since the storm hit on September 20.

Techmanski said he did not regret coming to the island and said again that his company's experience in linework in mountainous regions made it suitable for the Puerto Rico contract.

He said Whitefish had done FEMA-funded projects in the past.

Now, he is moving towards their exit plan -- hoping to get payment from PREPA so they can work the last 10 days before their contract is up on December 1.