Why are so many Navy ships crashing? 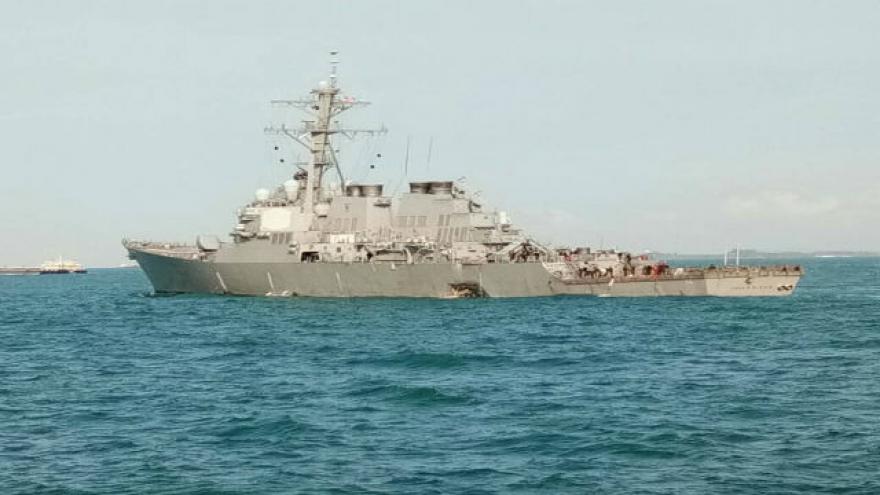 (CNN) -- The US Navy is facing difficult questions about the health of its fleet in the aftermath of the USS John S. McCain's collision with an oil tanker east of Singapore on Monday, the latest in a series of naval accidents in the Pacific.

Chief of Naval Operations Adm. John Richardson ordered a rare, one-day operational pause in response to the latest collision. And while the cause of the USS McCain crash is still to be determined, the spate of accidents -- four since January -- suggests there could be a more systemic issue.

Lawmakers and defense analysts are warning that the Navy's readiness problems -- which have led to longer deployments for ships and less time and money for maintenance and training -- could be playing a role in the uptick in crashes.

In addition to the Navy's stand-down, the Marine Corps grounded all of its aircraft for 24 hours earlier this month on the heels of two deadly crashes "to focus on the fundamentals of safe flight operations, standardization, and combat readiness."

House Armed Services Committee Chairman Mac Thornberry, R-Texas, said it was unprecedented that "two military services have now had to take a knee to review safety and training procedures."

"We ask a lot of our men and women in the Navy," Thornberry said in a statement. "The time they spend at sea is increasing, while their ships age and their funding gets cut. These are just the conditions that can lead to an increase in the kinds of accidents we are witnessing."

Retired Navy Rear Adm. John Kirby, a CNN diplomatic and military analyst, said the Navy's review will look at a number of factors to try to understand whether there's a systemic problem.

"They'll look at the quality of leadership at all levels, the amount and the quality of training that commanders have been able to get done, shipboard watch-standing procedures and qualifications, and system and equipment readiness," Kirby said. "I suspect they will also want to consider the degree to which the budget uncertainty of the last few years has likewise affected any of those factors."

To Republicans and some Democrats in Congress, the budget issues affecting military readiness have long been a point of concern, as maintenance and training dollars have often been the first cut while the Pentagon has faced constrained budgets under the 2011 Budget Control Act.

Former Virginia Republican Rep. Randy Forbes, who is now a fellow at the Naval War College, said the concern over the recent incidents goes beyond just determining why the collisions occurred, but points to a broader issue if the Navy had to ramp up in a significant conflict.

"When our ships are having this much difficulty sailing in open waters, it gives us a lot of concern about what would happen if we were in a major conflict and how we would operate there," Forbes said. "The Navy is in desperate need of additional resources so that they can do the kind of training they need, they can do the kind of ship maintenance they need."

Congress is sure to review the incidents, too. Virginia Republican Rep. Rob Wittman, who chairs the Armed Services seapower subcommittee, said Monday he would be conducting a review of all ongoing naval operations to ensure sailors' basic safety.

"While I support the Chief of Naval Operations operational safety stand-down of the fleet, I believe that there are even more basic causes for this systematic operational failure of our fleet to include a demanding operational tempo, limited training opportunities and inadequate funding to support basic needs," Wittman said.

Jerry Hendrix, a defense analyst at the Center for a New American Security, said that the Navy has attempted to be more innovative with its ships as the number of vessels in the US naval fleet has decreased.

But that concept needs to be examined to determine if more basic procedures have been lost or diminished as a result, he said.

"Our fleet size has come down, and we've been trying to compensate for the smaller number of ships by becoming more innovative in the way that we use them," Hendrix said. "Our ships become more combat-effective working together as a group than they are singularly. But, in kind of going after that high-end innovative approach, have we missed or ignored or overlooked basic operational ship-handling skills?"

There could be other factors connecting the four incidents in the Pacific, which involved two Navy Arleigh Burke-class destroyers and two Navy cruisers.

Thomas Callender, a defense analyst at the Heritage Foundation and former Navy submarine officer, noted that the destroyer collisions occurred in low-light times of day and highly trafficked areas.

"Those are some of the most difficult times, sunset and sunrise, of trying to determine what your contact picture is, what you're really seeing with this," Callender said.

Forbes said traffic congestion would likely be a commonality, too.

"It's like when you have accidents on roads: Normally it's going to be where more vehicles are," he said. "It still doesn't justify it -- we've got to operate in those waters."

But the fact that all four Navy collisions this year occurred in the Pacific could also point to issues with training that are specific to the region, Hendrix said.

"The fact this is so regional ... it strikes me there's a degradation in training standards and operational procedures," he said.