Why are there emus in Berrien County? 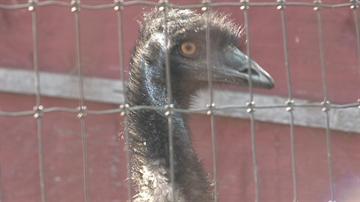 BERRIEN COUNTY, Mich. – In the past two-months Berrien County Sheriff’s Deputies have had to chase down two escaped emus.  The first of the large birds to run loose escaped from its owner and ran loose around Buchanan in October.  In mid-November another emu escaped its pen near New Buffalo.  These incidents begged the question, why are there emus in Berrien County?

“In 1992 we bought a pair of chicks for $1,000 each,” explained Melody Reitz, who runs Booming Acres emu farm with her husband.  “We had all sorts of farm animals and we decided we wanted to try something new.”

The name of the farm, Booming Acres, was inspired by the noise the female emus make.

“The females make the booming sound and it sounds like drums to people and it was just boom, boom, boom,” Reitz described.

Reitz is familiar with escaping emus; the birds can jump high and also clamber up fences.  Over the years she’s had two birds escape and when they get out they’re hard to catch.

“They can run as high as 45 miles an hour,” she described.  “You get a hold of them and they’re kicking and flailing their legs and fighting to get away”

Raising emus wasn’t just an excuse to get a new and different animal to raise, it was also a business decision.

“We were selling meat, we had meat products that we sold and we had the oil,” she explained.  “We had people coming in a 8 o’clock in morning and sometimes they’d be here until 8 or 9 o’clock at night seven days a week.”

Emu oil has a surprising number of uses.  The oil is a product of emu fat and can be used as a decongestant, an anti-microbial, skin moisturizer and even as a fuel system cleaner for cars.  But, the most popular use for the oil is as a pain reliever.

“It’s good for arthritis aches and pains, it won’t eliminate arthritis but it helps to cut down,” Reitz explained.  “If you get sun burnt in the summer it’ll take the pain away.”

However, during the economic downturn the emu business has taken a dive.

“People just have to watch their pennies for everything else,” Reitz said.  “There’s regulars that come back and they’ll buy a quart of oil or they’ll buy a couple of ‘4-ouncers’ because they like the oil so much.”

Still, Reitz explained that there are emu farmers across the county.  Michigan has its own emu farmers association.  Prices for products and the birds themselves have dropped but are rising again.  Whether business picks up again or not, Reitz wants to raise the big birds for a long time.

“I love them, my husband was almost ready to quit…I told him we’re not quitting the emu business,” she explained.  “Because I like being outside and I like being with my animals.”

The birds do have a charm, they’re generally skittish, but also curious and usually tame around humans.

“Each bird has its own personality, the males are usually more docile,” she described.  “But, I’ve had females that have been better than the males so it just depends on each bird.”

The birds originated in Australia; the Aborigines discovered most of the uses for the birds.  Though the climates differ, Reitz said her birds do fine in Michigan.

Reitz still sells emu products from the store at Booming Acres.  The farm also offers tours where people can get up close to the birds.