Why eclipses have inspired terror and awe 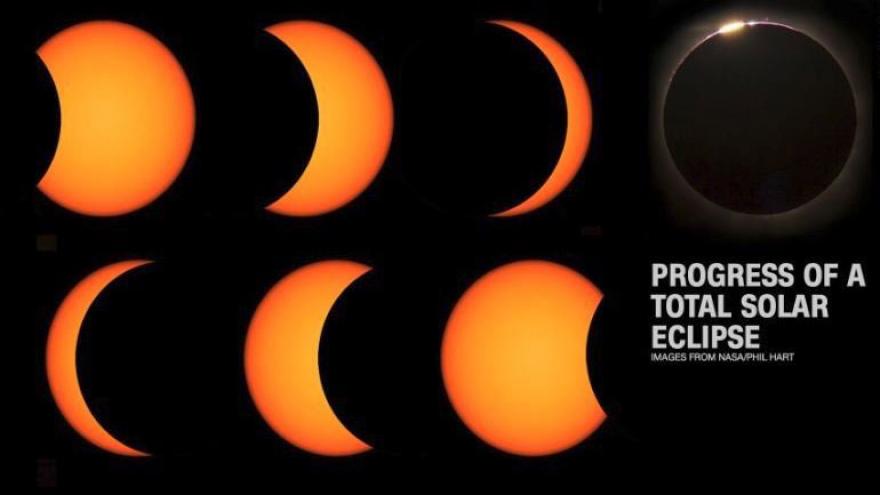 (CNN) -- Since ancient times, humans have looked up at the sky with both reverence and fear. When the United States experiences a total solar eclipse August 21, many astronomers expect that it will evoke a sense of awe, excitement and even unity.

But imagine that you didn't understand what an eclipse was and the sun disappeared from the sky unexpectedly, plunging the daytime into darkness. In ancient China, people would bang drums and pots and shout to scare off the dragon that was eating the sun.

"In ancient times, every culture had a sun god, and it was usually one of the chief gods of their whole pantheon," explains Bradley Schaefer, astronomy professor at Louisiana State University. "Humans couldn't touch what's in the sky, so they believed it must be where the gods are. When you have a total solar eclipse, it looks like the death of a god, and to them, that couldn't be a good thing."

The earliest example of this connection between eclipses and fear, dread and superstition goes back to clay cuneiform tablets from 2300 and 1800 B.C. that have been found in Mesopotamia. The tablets document the same omen across the Mediterranean: If there was a solar eclipse, the king would die. For societies dominated by kings, it seemed like the worst possible outcome, Schaefer said.

To avoid such a fate, thought to be possible within a hundred days of the eclipse, the king would abdicate and live in the palace as "the farmer." A condemned criminal would take his place and die within a hundred days -- by assassination, fulfilling the prophecy. "The farmer" would resume his rightful place on the throne, and all would be well again.

Researchers have records of messages sent to "the farmer," asking when he wanted "the king" to be killed, Schaefer said.

One exception is a case from 1850 B.C. in which "the farmer" died and the criminal retained the crown.

The fact that ancient people were willing to go through such a process reveals how much fear they had about eclipses.

Today, fear has been replaced by excitement. People look forward to total solar eclipses for years and hope for good weather so they don't miss the spectacle. But when did fear transition to excitement, and why?

When day turns to night

In fifth-century B.C. Greece, the philosopher Anaxagoras sought to understand and describe eclipses -- not as something eating the sun or the will of the gods but through an understanding of physics and the natural world. For example, he proposed that rainbows were a phenomenon of sunlight bending in rain instead of being caused by the goddess Iris.

Today, he's known as the first to correctly explain eclipses were just the sun casting the shadow of the moon on Earth. But the Athenians took him to trial and charged him with impiety -- sacrilege -- and he was sent into exile for the rest of his life, Schaefer said.

Thus, his idea about eclipses, including lunar eclipses, wasn't widely known. And that spelled disaster for the Athenians during the Peloponnesian War. In 413 B.C., when the aristocrat Nicias was leading an expedition to capture Syracuse on the coast of Sicily, a lunar eclipse occurred just as the Athenians realized that they could not win and had to retreat.

Nicias saw the eclipse as a bad omen and delayed the fleet's departure. Seizing the opportunity, the Syracusan navy destroyed the fleet of 200 ships and killed or enslaved the 29,000 Athenian soldiers. Athens surrendered in 406 B.C.

But the understanding of eclipses subsequently grew. When the Athenians went on an expedition to Syracuse 30 years later and encountered yet another lunar eclipse, they didn't stop.

A growing understanding of eclipses also promoted the concept of predicting them. The Greeks were predicting eclipses with reasonable confidence 2,000 years ago, and that knowledge spread to Eurasia. The Chinese developed a separate method to predict eclipses.

Over time, the ability to predict eclipses spread around the world, and with it came less fear. But the association of eclipses with bad omens or religious signs continued for centuries.

Even in photographs, spectators in 1920s America can be seen looking somberly up at the sky through smoked glass, as if waiting anxiously for the eclipse to pass, Schaefer said.

"That all changed in the 1970s, because that's when the big eclipse went up the East Coast" of the United States, he said. "It became a celebration that transformed the American view of eclipses, and that's when eclipse-chasers got started."

When the total solar eclipse occurs August 21, it will be the first to cross the United States in 99 years. Though it's too early to tell what its legacy will be, numerous experiments will be taking place on Earth and in space to see what knowledge about the sun and our planet can be gained from this rare event.

Throughout history, eclipses have enlightened astronomers about the sun and its corona. But the total solar eclipse in May 1919 revealed even more.

Albert Einstein wrote a paper on special relativity in 1905 and formed his theory of general relativity, or the relationship between gravity and the curvature of space and time, just before World War I.

He believed that an event like an eclipse would showcase this idea of light bending as it nears a massive object. Arthur Eddington, an English astronomer, read his paper on relativity and set out to test it during the May 1919 eclipse.

Eddington's photographs of the eclipse verified the theory by capturing the bending of starlight passing near the sun. Both Eddington's achievement and Einstein's brilliance were trumpeted in the media.

But it wasn't the first time the eclipse catapulted astronomers into the spotlight.

Author and journalist David Baron became an "umbraphile," or shadow-lover and eclipse-chaser, after witnessing his first total eclipse in Aruba in 1998. When he set out to write an eclipse book, news reports and letters from 1878 caught his eye. At the time, the United States was trying to reinforce its reputation for science on the global stage during Restoration after the Civil War. Pioneers were carving out a life in the western territories. Women were looking to get the vote.

"The best eclipse stories are not from today; they're from the 19th century, because that's when total eclipses were so important to science," he said.

Baron describes the great race to the eclipse in his new book, "American Eclipse."

Americans knew that an eclipse would to cross the American West in July 1878. Astronomers from across the country packed up their telescopes, determined to answer questions about the sun's corona.

Mitchell shepherded a group of female astronomers to the frontier, armed with telescopes, to study the eclipse. Watson was determined to verify that the "intra-Mercurial" planet Vulcan existed, hidden by the sun and waiting to be found during the eclipse. Edison wanted to prove himself and his new device, the tasimeter, which was designed to measure temperature changes in the heat of the corona during the eclipse. The American public cheered on the astronomers with patriotic furor, Baron said.

Unfortunately, the two biggest headlines out of the eclipse -- "Vulcan discovered," and "The tasimeter's great success" -- didn't hold up. Vulcan isn't a real planet, and the tasimeter became one of Edison's blunders.

"We are living in an America that was changed by the eclipse of 1878, but it's a little hard to piece these things together," Baron said. "Maria Mitchell helped open doors for future generations of women in science. If Edison hadn't gone west for the eclipse of 1878, I think there is a very good chance he would not have been the one to invent the light bulb, because if [his friend and professor] George Barker hadn't pushed him to work on electric lighting, he probably wouldn't have done it.

"There was such pride, much in the same way that the moon landing and the space race brought the country together to care about science."

Baron expects that millions of Americans will feel that same togetherness when the next total solar eclipse occurs.

"The eclipse experience for people in 1878 is almost identical to what its going to be today," Baron said. "Eclipses also really help connect us with history. It spans the generations and the centuries to connect us all together in this shared human experience. It reminds us that our differences are tiny compared to what we have in common, and I think it's exactly what we need right now."