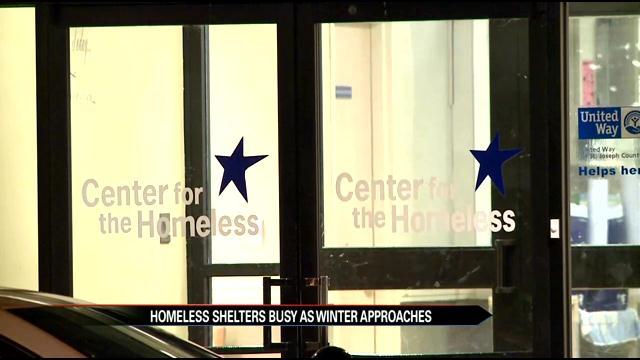 Michiana has seen below average temperatures for the last four days, and Sunday temperatures were almost ten degrees below the average.

Those chilly conditions are making many thankful for the South Bend's Center for the Homeless' winter amnesty.

“It's been a lot colder already,” said Lani Vivirito, the Chief Program and Resource Officer.

It will not be long before the streets are covered with winter's favorite dusting, and this year's season is giving us a preview of what could be.

“Typically in years past, we haven't seen ours beds fill up right away,” said Vivirito.

She said eight days into winter amnesty and 2014 is already giving 2013 a run for its money.

She said regardless of what the thermometer reads, it is too cold for people like Ron Maze to be resting their heads outside.

“Well it is if you're trying to sleep in it, you know?” said Maze.

He said after some bad luck, he has been forced to live in the streets for a year now.

He lined up in front of the shelter's doors to guarantee himself a pad to rest on.

“Relax and you don't have to worry about freezing to death, because it's going to get a lot worse before it gets better, that's for sure,” said Maze.

Freezing to death is a scary possibility that those who are unsheltered this winter face and Vivirito said despite the circumstance that got them here no one deserves to see that possibility.

“None of those reasons for homelessness mean that someone deserves to be outside in the freezing cold,” said Vivirito.

The center accepts donations of blankets, gloves, coffee, linens, just about anything that can assist them in keeping those less fortunate warm this coming season.
Share this article: