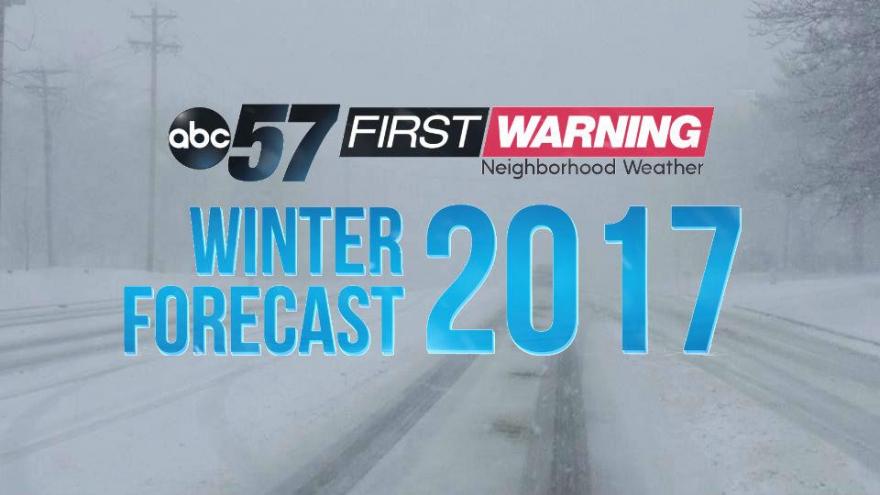 After a relatively easy winter last year, 2017 is looking to be more turbulent. A very mild autumn, La Nina and the Polar Vortex will be key factor that impacts our impending snow season. Even if winter starts off mild and less snowy, trends show what could be a harsh mid-winter in January and February.

When Will We Cool Down?

At of the end of October, autumn 2016 has been in the top ten for warmest on record. All signs show this continuing through the first two weeks of November and possibly the rest of the month and into December. That's not to say we won't have a few cold days but overall likely staying mild. This may stave off some minor snowfalls, however it leaves us more exposed to the potential for a big lake effect snow with warm lake temperatures. Buoy temperatures in Lake Michigan were still in the upper 50s on Halloween. Last year was one of the strongest El Ninos on record. It had a dominate impact on the overall winter weather pattern. Bringing milder and less snowy weather to the Midwest. This winter, La Nina conditions are expected to develop. It's still questionable how big an impact La Nina will have on the overall winter pattern, but typically it brings colder and snowier winters to the Great Lakes. The term may be relatively new to many, but it's impact has been know for awhile. The circulation of cold air around the north pole offers clues to how active a winter season may be. When the Polar Vortex is strong, the arctic air typically stays over north pole. When it's weak it becomes more lopsided and cold and spills into the lower latitudes. The climate is changing. We're somewhat buffered by those impacts in Michiana thanks to the Great Lakes. However global changes can have local impacts and that could be more pronounced in winter. Arctic sea ice has been melting more than it's been accumulating. This has been one of the lowest arctic ice years since the 1970s, when we started keeping track with satellites. This is where a changing climate can be linked to changing weather patterns. Open water is warmer than ice. That can lead to less colder air over the poles, and impact the Polar Vortex.

Eurasian snow cover is above normal but has currently stalled. However both low sea ice and a persistent negative AO are favorable for the resumption of a more accelerated advance of Siberian snow cover. High Eurasian snow cover and low Arctic sea ice in the Barents-Kara seas favor first, a strengthening Siberian high and then a weakened polar vortex in winter. - Dr. Judah Cohen from Atmospheric and Environmental Research

Last winter was mild. It was the 9th warmest on record and we saw below normal snowfall during the winter months ( DEC, JAN & FEB), but total snowfall was actually above normal for the snow season ( OCT to MAY). Thanks in part to a heavy lake effect snow in November. There's a similar but more volatile pattern looking at total snowfall of the October to May snow season. Temperatures however, have averaged (mean) to be just above normal since 2000. More significant, is five of those 17 years were in the top 10 warmest. Those years saw below normal snowfall but this is where the Great Lakes can act as a buffer for Michiana. Even in warm years we can get significant snowfall thanks to lake effect snow. A warm lake can fuel heavy lake effect snow when arctic air does arrive. A warm November and December could stave off the start of harsh winter weather but don't let your guard down. With a developing La Nina and an expected weak and more fierce Polar Vortex January and February are likely to see bouts of cold and likely some heavy snows.

Above normal snowfall is likely, 85 inches in the winter months alone with up to another 10 inches that could come in November and/or March. Temperature trends could be a little harder to forecast if December ends up being mild, but January and February look to be cold, with at least six days with subzero temperatures. Thanks to the National Weather Service of Northern Indiana  for compiling and sharing some of the large data sets for this article.