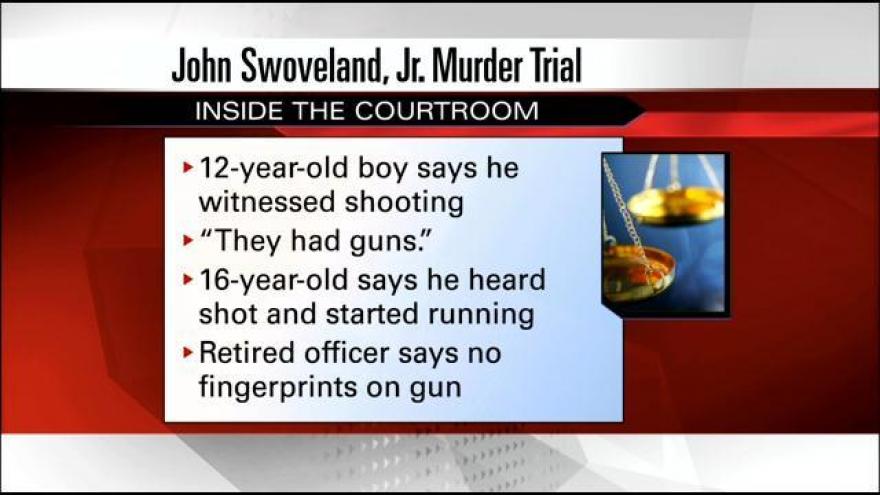 A 12-year-old witness testified in the trial of Robert Griffin, who is accused of firing the bullet that killed 2-year-old John Swoveland Jr in April 2014.

Avion, 12, testified he was playing on the playground at Coquillard Park with 3 friends on April 9, 2014.

He testified that he saw Griffin and several other people at the park that day.

When the state asked what they were doing, Avion said, “They had guns.”

Avion said when he and his friends heard gunshots, they ran from the park.

According to the state, when Robert Griffin fired the fatal shot, he was actually aiming at 16-year-old Larry Bobbitt Jr.

Bobbit testified to seeing a gun on Griffin's waist on April 9th.

He testified on April 9th, 5 or 6 guys approached him at the park while he was riding his bike. He was given the choice to fight one of two guys, Malcolm or Griffin.

Bobbitt said he chose to fight Malcolm because he saw Griffin had a gun.

But as the fight between Malcolm and Bobbitt was set to begin, Bobbitt said Griffin pulled the gun out.

He heard a friend in the group yell "Don't shoot!"

"I seen the first shot and that's when I turned around and started running," Bobbitt testified.

He said he heard a total of about 7 shots as he zigzagged down Campeau Street.

Those shots missed Bobbitt, but the prosecution says one of the bullets struck Swoveland.

A retired South Bend Police officer and current director of the crime lab testified there were no fingerprints found on the recovered gun.