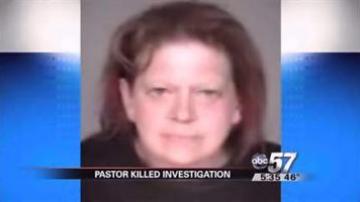 SOUTHPORT, Ind. -- The murder case is moving forward in the shooting death of an Indiana pastor.

Lori Ann Barcroft, 46, made her first appearance in court Tuesday. She was formally charged with murder in the death of the Reverend Jaman Iseminger.

Investigators say Barcroft approached a group of volunteers near Bethel Community Church in Southport Saturday morning and asked for Iseminger by name.

After volunteers directed her inside the church, they reported hearing at least two gunshots. Barcroft's son said she's mentally ill and possibly suffers from schizophrenia.

“It appears that way if her lawyer feels that there are issues she will be asked to be evaluated,” said Deputy Prosecutor John Kieffner.

Police say she has admitted to shooting Iseminger.