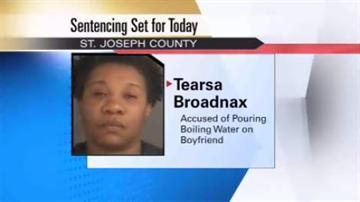 SOUTH BEND, Ind. — A South Bend woman accused of pouring boiling water on her sleeping boyfriend was sentenced to five years in prison.

Police said that Tearsa Broadnax, 41, confessed to the June 9, 2012 assault on her boyfriend, Ricky Clark.

His burns were so severe that medics rushed him to the Fort Wayne burn unit.