Woman dies after getting hit by a vehicle in Osceola 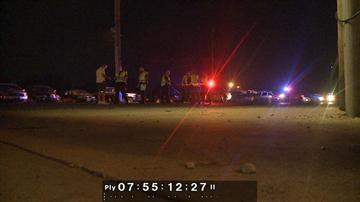 OSCEOLA, Ind. - A woman was seriously injured after she was hit by a vehicle Saturday night.

The accident happened on Lincolnway West near Lambport St. just before 11 p.m.

Witnesses on Facebook wrote that it happened near Mr. G's Pub.

The owner of Mr. G's Kevin Candler told ABC 57 at the scene two of his patrons heard the impact of the car hitting the woman.

It's unclear how the accident happened or what type of vehicle hit her.

The age and name of the victim have not been released, it's also unclear the extent of her injuries.

First responders reported that the woman was unresponsive and bleeding heavily from the head when they arrived.

Lincolnway West is closed as of 12:20 a.m. in both directions.

Another witness told us they saw the ambulance get an police escort to Memorial Hospital in South Bend.

Sunday afternoon it was confirmed that the woman died as a result of her injuries.