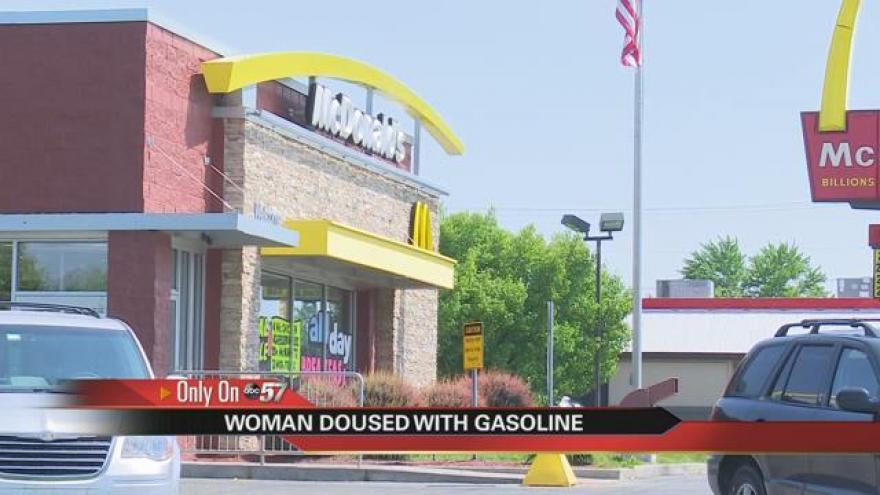 A McDonald's employee was injured when a customer threw a cup full of gas into her face while she was working the drive-thru. The victim spoke exclusively with ABC57 about the incident and her injuries.

Kayla Prater, 24, says the attack was random and the person responsible is still out there.

Prater says she has worked at the McDonald's in Elkhart for a year without any trouble.

Last Friday when she was working the drive thru window in the morning, a car full of young men pulled up.

"They came up to the window and asked for a cup of water and I was getting them the water and then they said 'hey [expletive deleted]' and tossed the gasoline in the window on my face and my arm and my shoulder," said Prater. "It burned. It just burned really bad."

"Why would somebody do that?" said Prater.

The memory of the attack is always on her mind.

"They just threw it and then they drove off and they laughed about it," said Prater.

"It's not funny. This is a serious Matter," said Wight.

Prater works the night shift to support her sick mom.

On Tuesday, Elkhart Police said a detective has been assigned to the case.

"Hopefully they catch them," said Prater.

There was surveillance video and there might be more.

Prater says the gas had been poured into a 7-Eleven cup, and there's a 7-Eleven right across from the McDonald's.

Prater says the suspects were driving a black SUV.

"They were three young black kids between like 18 and 21," said Prater.

Prater says she's hoping they don't come back again when she goes back to work.

Prater has physically recovered, she said the hospital diagnosed her with eye irritation and small burns on her face.

She says McDonald's paid for her medical bills.

If you have any information about the suspects, please call Elkhart Police.