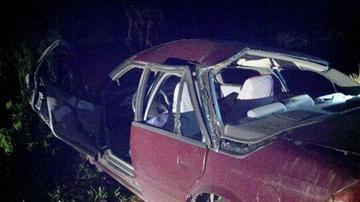 The victim is identified as Christine R. Ciesiolka of South Bend.

Deputies say the crash happened on the 65000 block of Miami Road just after 6 p.m.

When deputies arrived on the scene they found Ciesiolka, laying in the road after being ejected from her car. She was pronounced dead on the scene.

There were no other occupants inside the vehicle.

According to deputies Ciesiolka had just dropped her child off at the child's fathers house and was northbound on Miami Road when her car left the side of the road and rolled several times.

Ciesiolka was ejected from the car and died instantly.

Speed is being looked at as a possible factor int he crash and toxicology results are pending.

The St. Joseph County Police is asking that anyone who may have witnessed the crash to call Major Dean Chandler or Capt. Jim Rutkowski at 574-235-9871 during normal business hours.