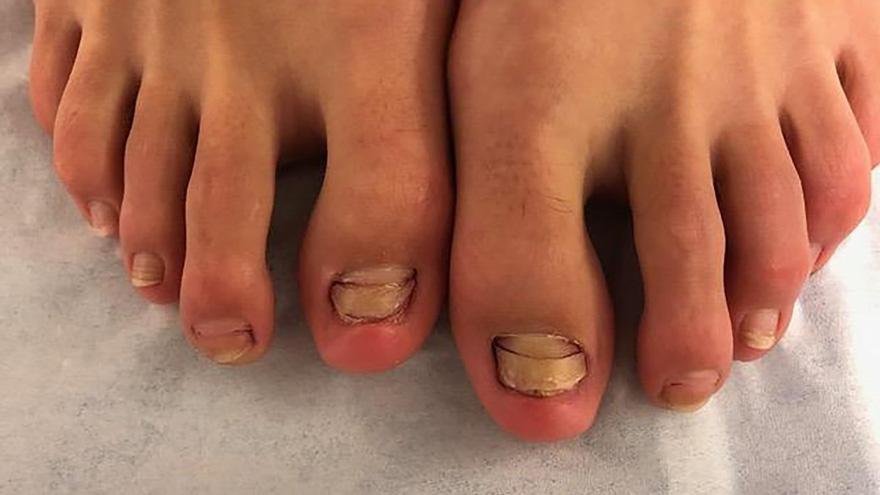 (CNN) -- After a young woman's toenails started to separate from her toes, a doctor finally zeroed in on the reason: a fish pedicure, according to a report published Tuesday in the journal JAMA Dermatology.

Six months prior, the woman had dunked her feet in a tub of water filled with tiny fish called Garra rufa that will eat dead human skin when no plankton are around. It wasn't until later on that she noticed her nails beginning to shed.

"I think that this is probably more common than we think," said the report's author, Dr. Shari R. Lipner, an assistant professor of dermatology at Weill Cornell Medicine and director of the nail division.

"We don't see the [nail] shedding until months after the event, so I think it's hard for patients and physicians -- especially if they're not even aware that fish pedicures can do this -- to make that connection," she said.

This phenomenon, known to doctors as onychomadesis, usually results in the nail falling off long after an initial event (such as an injury) arrests nail growth. In her report, Lipner describes this as a "relatively common physical examination finding" that has been linked to infections, medications, autoimmune and heritable conditions.

Lipner said the patient had no other medical history that she could link to her abnormal toenails. Although there's no definitive test for fish-nibble-induced toenail loss, "I think we're fairly sure that it was the fish pedicure," she said.

"I am not convinced at all that the fishes caused the problem," Dr. Antonella Tosti, the Fredric Brandt Endowed Professor of Dermatology at the University of Miami Miller School of Medicine, wrote in an email.

Tosti, a former president of the European Nail Society, said the woman's problem could be caused by something much more mundane: overlapping toes in a certain type of shoe.

"This is not uncommon in women with a Greek foot ... who wear high heels and pinpointed shoes," Tosti said, referring to feet whose second toes are longer than the first, like Greek statues.

Toenails usually grow at about 1 millimeter per month, Lipner said, so a nail can take up to a year to fully grow back.

Lipner is unaware of any other such cases linked to fish spas, whose popularity seem to have drawn from unfounded claims about their health benefits, according to her report. However, the use of "doctor fish," as they are also known, goes further back in other countries, such as Turkey.

Another species of fish, which "grows teeth and can draw blood," is sometimes mistaken for Garra rufa and used in fish pedicures, according to the US Centers for Disease Control and Prevention. Lipner was not able to identify the fish species involved in this case.

While Lipner believes that the woman's problems stemmed from the physical impact of the fish biting at the nail, she noted that there have been past reports of infections associated with fish pedicures, too.

Experts say they're unsure how infections might be spread through fish pedicures. It could be due to lingering microbes from whomever's feet were there last, versus the fish itself. Health experts have raised concerns that, in fish spas, the fish are recycled from person to person, and the tubs may not be properly cleaned between uses.

In the UK, "the salons themselves were really popular here; they sprung up very rapidly," said Amanda Walsh, a senior scientist with the Emerging Infections and Zoonoses team of Public Health England. In work done previously with the UK's Health Protection Agency, she helped produce the agency's 2011 guidance on fish spas.

Their recommendations dealt with hygiene and infection control, "as would be required for other types of beauty salons." But there were special contraindications for fish pedicures that needed to be considered; recent waxing or shaving, certain skin disorders and cuts on the feet or legs could increase one's risk of infection, she said.

In 2011, an investigation by the UK's Fish Health Inspectorate found a bacterial outbreak among thousands of these fish, which had been transported from Indonesia to UK pedicure spas. Fish were found with bulging eyes, many hemmorhaging around the gills and mouth. The culprit was found to be a streptococcal bacteria, a strain that is associated with fish like tilapia, according to David Verner-Jeffreys, a senior microbiologist at the Centre for Environment, Fisheries and Aquaculture Science in the UK.

"I wouldn't say it necessarily poses a significant risk to humans, but it did illustrate that they may be carrying things which are nasty both to fish and humans," he added.

But in the UK, the fish spa fad didn't stay around for very long. "It was a bit of a craze people got excited about, and then they moved on to the next thing," said Verner-Jeffreys, who added that the concern surrounding fish spas is not just about human health.

"We did have some concerns about the welfare of these animals being transported around the world, often by people with limited experience," he said. And healthy fish, he added, would mean "less problems all around."

What's in a name?

Despite the name, "fish pedicures do not meet the legal definition of a pedicure," the CDC says.

Their use has been banned in some states in the US -- at least 10, by Lipner's count.

While Garra rufa have been investigated as a treatment for psoriasis -- though not in the context of a nail salon -- Lipner stressed that this is not standard medical practice.

"I would be highly surprised if you found any dermatologist who recommends Garra rufa pedicures," Lipner said.

"I think we can pretty definitively say that getting a fish pedicure is probably not the way to go to treat skin and nail conditions."