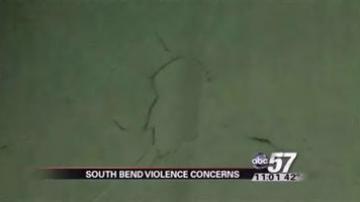 SOUTH BEND, Ind. -- Crime on the West Side is nothing new, but one woman said her home is being targeted.

On Saturday night, someone threw huge bricks of asphalt through three of her windows in her house. The worst part is the police refuse to investigate.

She ran to the kitchen with her baseball bat and could not believe what she saw.

“I found three of my windows broken," said Ferraro.

Julie said the rock was thrown so hard, it went through the front screen, broke her inside window, and hit her refrigerator.

She quickly dialed 911 and twenty minutes later an officer showed up. She said he took a quick look around the house and that was it.

“He basically asked me if I wanted a report just for insurance purposes or if I wanted to file charges," said Ferraro.

Ferraro said of course she wanted to file charges.

“This is a crime," said Ferraro.

And she said she was upset the officer did not take the crime more seriously. To make things worse, she said this is not the first time police have not investigated crime at her home.

“A kid came from the alley put a gun in my back and robbed me," said Ferraro.

Julie said she feels police have given up on her neighborhood.

“I think it is because it is the Westside. They just don’t care," said Ferraro.

ABC57 did contact the South Bend Police Department to see if they are investigating this case.

A commander with the patrol division said there was a report taken and Ferraro did list someone as a possible suspect.

But the officer says with no witnesses to the crime, they don’t have much to go on and she says the final decision as to whether the case warrants a follow up will be made by the chief.