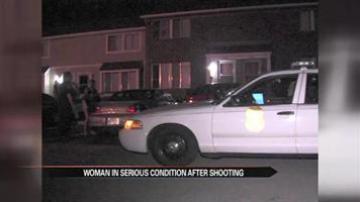 INDIANAPOLIS, Ind. --- A woman is in serious condition after she was shot Saturday morning in Indianapolis.

The shooting occurred near the city's north side.

Police were called to the scene around 4 a.m.

Police say two women were parked in their car when a man approached them and shot one of them.

Police didn't say if the other woman was injured.