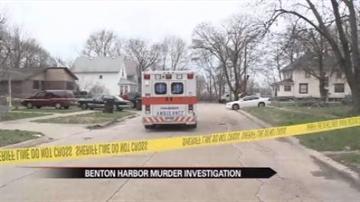 The Benton Harbor Department of Public Safety identified a male suspect who fled the scene prior to officers' arrival, but hasn't released the man's identity to the public.

Friends and family say the victim is Nita Broyals. They say she worked two jobs to support her family.

She leaves behind three young children.

"And wanted to better herself. She worked two jobs and just moved here trying to get her life together and this happened,” said Evette Pullian, the victim’s cousin.

Neighbors say the woman fell victim to violence inside her home on Madison Street.

Violence, neighbors say, they don't want to see seep into the north side.

"I'm thirty years old and I've been over here 25 years and there was never no murder over here like that,” said Little.

He said the area sees break-ins, but rarely targeted murders.

Police did quickly identify a male suspect who fled the scene before they arrived.

"I woke up to this and this hurt me a lot. To find out that a young lady so beautiful-to come out and be like this,” said Little.