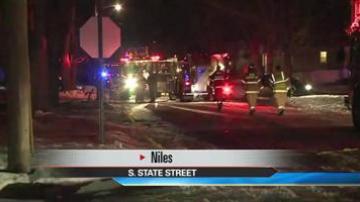 NILES, Mich. -- A woman was hospitalized with stab wounds to her chest after an incident Saturday evening.

Emergency workers were called to 415 North State Street a little before 7 Saturday evening, where they say the stabbing happened.

Police took one suspect into custody, who is also being seen at hospital.

When police arrived to the home they say there was a strong odor of gas and neighbors were evacuated from their homes.

“We seen some police officers running up to the neighbors doors over here and they’re saying to get out, that there’s a bunch of propane in the house and there’s a possible explosion,” said one neighbor.

Niles Police Chief Jim Millin said, “When the officers first approached the residence to make contact with the male, they thought they could detect an odor of gas and male subject did say something about blowing up the house or igniting it. The fire department has cleared out the house of any gas.”

Neighbors have since been able to return home. The police chief says it appears to be a domestic incident.