Woman who lived in city-owned building now on the streets 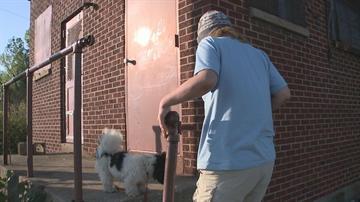 BENTON HARBOR, Mich. -- A woman living inside a city-owned building has difficult choices ahead.

Tuesday, the makeshift home Melissa Hooks set up in an abandoned pumping station was found near the Harbor Shores Golf Course.

"Am I scared? Yeah," Hooks said Wednesday as she set up plans to move out of the building.

Hooks is one of an estimated 170 people in Benton Harbor who live on the fringes. For the past three months Hooks found shelter in the abandoned building.

"I cleaned it up,” Hooks said. “Made it a home and an apartment."

Hooks is a self proclaimed prostitute and alcoholic and when asked said she isn't allowed in homeless shelters. "If you have any alcohol on your breath you can't stay there and I’m an alcoholic."

"We have overflow, we have air mattresses and if we have no air mattresses we have a chair,” said Kris Massie with Emergency Shelter Services. “We're going to do something to get you in for the night."

Emergency Shelter Services takes in several families on Pipestone Avenue. The building is at capacity every night but make room for homeless who need a place to go. For safety concerns everyone needs to be sober.

Once someone is admitted to the shelter there are a number of services provided.

"Four years ago, I was in the homeless shelter," said Lashonda Campbell a case worker at the shelter.

Campbell is a success story. She learned job skills and eventually landed a full-time position.

"Sometimes you need to reach in yourselves and get out of some of the old ways in order to get to the surface of the problem," she said.

At least in Hooks’ situation, she's not ready to make a sacrifice. "You can’t stop drinking?” she was asked.

“So it's more important for you than a place to live?”