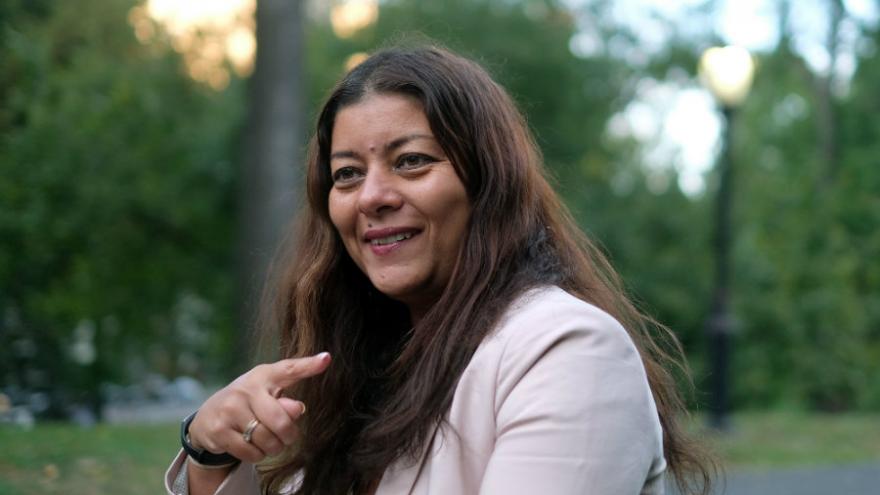 (CNN) -- The woman who began France's own version of the #MeToo movement is being sued for slander by the man she accused of making lewd comments about her.

Journalist Sandra Muller started the #balancetonporc (squeal on your pig) campaign in the wake of allegations made against disgraced film producer Harvey Weinstein.

In a Twitter post on October 13, Muller alleged that Eric Brion, a senior French television producer, had humiliated her by saying: "You have big breasts. You are my type of woman. I will make you orgasm all night."

'I will fight this'

The move comes despite Brion admitting he made the comments and making a public apology in a column published in Le Monde newspaper on December 30.

"Eric Brion has finally changed his strategy and decided, against all decency, to take me to court," she wrote.

"I will fight this until the end with the help of my lawyer, and I hope that this trial will be an opportunity to hold a real debate on the ways to combat sexual harassment."

Read: Amazingly, some people still think men are the real victims of #MeToo

Speaking to CNN Friday, Muller's lawyer said his team would prove the statements were not defamatory.

Brion maintains that he has never worked with Muller but her lawyer, Alexis Guedj, believes his client has a strong case.

"Of course, there was no work relationship between my client and Eric at the time, but since they were at a work event when everything happened, it can still be considered as sexual harassment in the workplace."

Brion's legal representatives told CNN they would not speak to the media until they are ready to disclose more information.

Writing in Le Monde late last month, Brion admitted making "inappropriate remarks" to Muller, "very late at night, during a drink-fueled cocktail party evening, but I did it only once."

He added: "I liked her. I told her so, in a heavy-handed manner but only once, I want to clarify it. I certainly do not want to absolve myself from my boorish behavior at that time. I reiterate my apologies here."

In the article, he also said that he regretted his words but added he would have rather been tried in a court of justice rather than the court of social media.

He also said it had been "nearly impossible" for him to find work since the incident.

"'The first two almost simultaneous tweets from Sandra Muller deliberately creating ambiguity about what happened that night," he said.

"I have never worked with Sandra Muller. I have never collaborated with her or been her supervisor, as I read here and there... This can easily be checked, but once the hellish machine is started, it cannot be stopped. The personal and professional consequences of this conflation of heavy-handed flirting and sexual harassment 'in the workplace' were very serious and damaging."

Muller was listed by Time Magazine as one of the "silence breakers" honored by the publication as its person of the year.

She said many other women had spoken out after she shared her tale on social media.

"The #balancetonporc movement has inspired victims to speak out, and has shed light on a real social problem that is still such a taboo," she added on Facebook.

"I was rewarded, alongside other women and men, by being named on December 6th as Time's Magazine's personality of the year, for breaking this heavy silence. With this summons, however, they want to force me to shut up.

"From the highest levels of the state, to feminist associations, philosophers, intellectuals and members of civil society, many personalities have lent their support to this movement, underlining the need to alert and to act against this type of aggression."