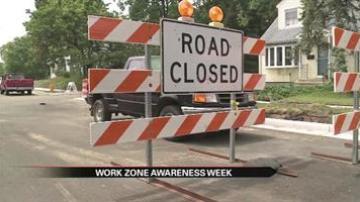 SOUTH BEND, Ind. – In 2013, 13 motorists were killed and more than 450 people were injured in highway work zone crashes. Governor Pence has designated April 7 the first day of Work Zone Awareness Week in the state of Indiana.

With the sun finally shining over Michiana, it brings new light to the messy state of Indiana roads.

Some of the major work zones are stretched across Indiana, many of them in Saint Joseph, Elkhart, and Marshall counties.

The much needed road reconstruction also brings headaches for drivers by blocking off roads or creating detours.

“That part is a pain, but it will be nice to have them done,” said South Bend resident Paula Richards.

“It’s a catch 22, you have to deal with the road construction to get there which is never fun while it is going on, but it is nice not having roads that are full of potholes,” said Chris Arrosmith from Mishawaka.

“Take the country roads or scenic routes, we stay away from it as much as we can,” says Medaryville resident Arthur Conley.

INDOT is putting up $800 million to fund these highway construction projects.

Work zone speed limits will be strictly enforced this season to prevent any deaths or injuries to workers on site.

“I slow down, which you should,” said Ron Scheetz from Kalamazoo. “They are putting their life out there, 4 feet away from semis and cars, it’s a dangerous job just being there, let alone do the work.”