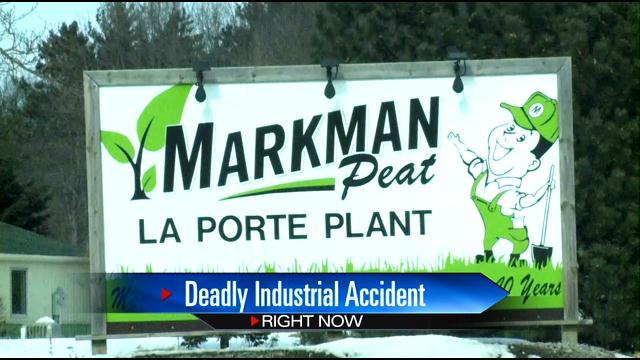 A worker at Markman Peat was pronounced dead at the hospital after he was found trapped in a machine.

According to the LaPorte County Sheriff's Office, at 6:20 a.m. CST, deputies, fire and EMS were called to Markman Peat on Hupp Road regarding a worker trapped in machinery.

A worker discovered 41-year-old Alejandro Anguiana trapped in a running piece of machinery.

Anguiana is a payload operator and it is not known why he was near the machine except to possibly turn it on.

When officers arrived, EMS was treating Anguiana, but he was unconscious and unresponsive.

"Very rare. Safety is always the primary concern in any industrial situation. The primary thing in this investigation was it was not witnessed and unfortunately those are some things we will probably never be able to answer - how this gentleman got caught up in the machine,” said Captain Mike Kellems of the LaPorte County Sheriff's Office.

Anguiana was taken to IU Health/LaPorte Hospital where he was pronounced dead.

The LaPorte County Coroner says the cause of death was both a broken neck and positional asphyxiation.

“We've completed the investigation. We don't see any reason to continue investigating. There was no foul play found at the scene we believe this was just simply an industrial accident,” said Kellems.

The Indiana Occupational Safety and Health Administration is investigating.