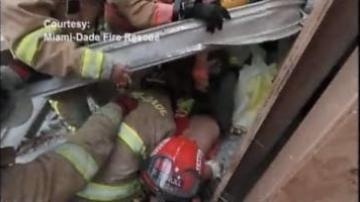 MIAMI -- The family of a Florida man still trapped in the rubble said they're frustrated by what they're calling a lack of urgency in trying to find him.

A 53-year-old electrician is one of the workers still trapped after a portion of the five-story garage at Miami Dade College's west campus fell last week.

Three construction workers were killed in the collapse. The campus remains closed.