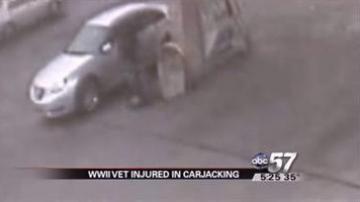 DETROIT, Mich. -- A Michigan man was carjacked in broad daylight.

It happened in front of several witnesses, but no one would help.

Eighty-six-year-old Aaron Brantley was pumping gas at a busy Detroit gas station. That's when a man came up behind him knocked him to ground and drove off with his car.

Brantley actually crawled to the gas station for help he even asked a mom and her kids to open the door, but no one would stop to help.

“I was wondering why they were passing me, they saw me crawling. They knew something was wrong,” said Brantley. “But people don't want to get involved in anything today.”

Brantley said he's just thankful he wasn’t shot in the carjacking. Detroit police have since recovered his car and looking for evidence to help make an arrest.