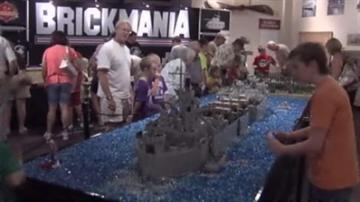 EVANSVILLE, Ind. -- One man has constructed a 24 foot Lego replica of a World War II ship, the LST 325 vessel to be exact.

The original vessel took thousands of men to build, but this Lego replica of the Battle of Peleliu is on display right now at the Evansville museum transportation center.

The ship took up to 40,000 pieces while the whole diorama took half a million Legos.

"Usually, I build stuff for my own enjoyment, but that sort of ends once it's built. So, put it on display and let other people enjoy it too," said builder Dan Siskand.

He says the ship took two weeks to build and the entire project took six months to plan.