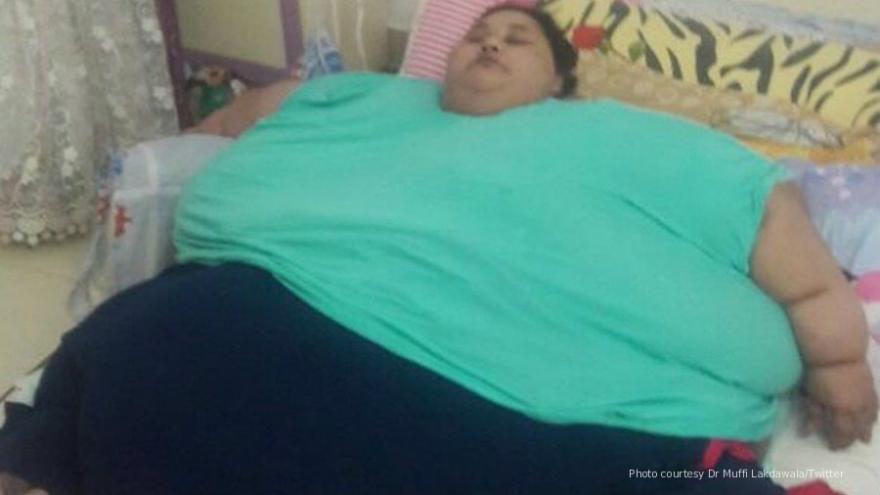 (CNN) -- Eman Abdul Atti, once believed to be the "world's heaviest woman," died on Monday due to complications from heart disease and kidney dysfunction, according to a statement from Burjeel Hospital in Abu Dhabi, the United Arab Emirates.

All signs looked positive immediately following the surgery for Eman, who had lost more than 200 pounds prior to the operation.

"She is very happy, she started dancing in her bed," Dr. Muffazal Lakdawala, the surgeon who performed her laparoscopic sleeve gastrectomy operation, told CNN in March. "Her smile has come back." The procedure involves removing part of the stomach so that only a "sleeve," roughly the size and shape of a banana, is left behind, along with the muscle that controls emptying food into the intestine.

Eman's family said Eman had weighed 11 pounds (5 kg) at birth and suffered from thyroid problems since she was a child. The thyroid gland produces hormones that help regulate metabolism. By fifth grade, she'd stopped going to school because she'd begun to have difficulties moving and walking.

For the past two decades, Eman has barely left her room, her family reported. She suffered a stroke and, unable to move or communicate, her weight increased to more than 1,000 pounds. Her health deteriorated rapidly.

Her sister created a social media campaign last year and Lakdawala responded by offering to help. His proposed three-and-a-half year plan including two operations to help her reduce her weight to less than 220 pounds (100kg).

Eman overcame a number of hurdles to reach what her family had hoped to be a life-saving surgery in Mumbai, including an initial refusal to grant her a visa because of her inability to get to the embassy in person. After surmounting that problem with the help of an Indian minister, she then faced the difficulty of boarding an airplane.

Egypt Air specially adapted a cargo plane to transport her to India.

Following the surgery, Lakdawala said her kidney function had improved.

"She has done well post-surgery," he told CNN in March. At that time, he intended for her to lose another 155 to 175 pounds (70 to 80 kg) within the next couple of months. The plan was to then send her home to Egypt and schedule a second surgery for next year.

Eman was later transferred to Burjeel Hospital in Abu Dhabi. There, her condition was managed by a medical team of more than 20 doctors in different specialties.

However, her heart and kidneys could no longer function.

Today 62° Mix of sun and clouds