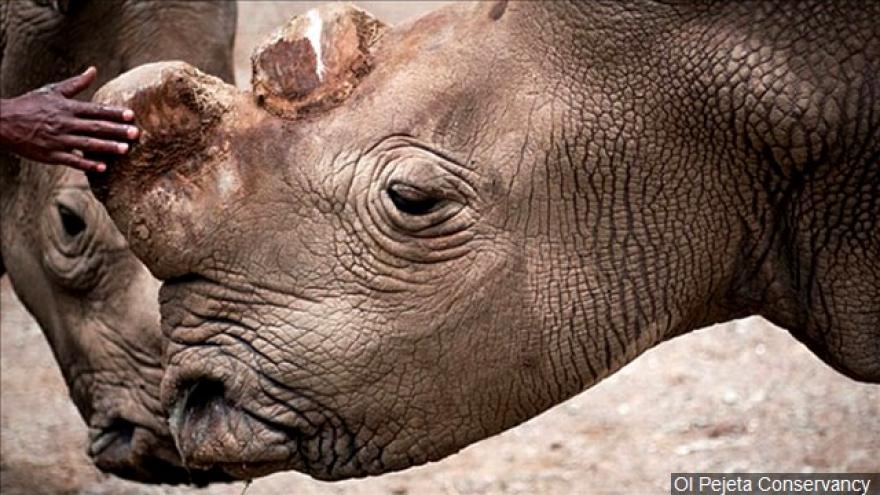 For nearly a decade, Sudan lived in a 700-acre enclosure at the Ol Pejeta Conservancy, against the backdrop of the hulking Mount Kenya. Armed guards protected him 24 hours a day because he belonged to a subspecies on the verge of extinction from poachers. Photo courtesy Ol Pejeta Conservancy

For nearly a decade, Sudan lived in a 700-acre enclosure at the Ol Pejeta Conservancy, against the backdrop of the hulking Mount Kenya.

Armed guards protected him 24 hours a day because he belonged to a subspecies on the verge of extinction from poachers. Rhinos are targeted by poachers fueled by the belief in Asia that the horns cure various ailments.

The need to preserve the northern white rhino is dire -- there are no known animals left in the wild.

At 45, Sudan was elderly in rhino years. His daughter Najin, 28, and granddaughter, Fatu, 17, are considered spring chickens.

The elderly rhino was fraught with problems normally associated with age. During his final years, he was not able to naturally mount a female and suffered from a low sperm count, which made his ability to procreate difficult.

Najin could conceive, but her hind legs are so weak she may be unable to support a mounted male.

"There has been recorded mating between different pairs over the last few years, but not conceptions," George Paul, the deputy veterinarian at the conservancy, said. "Based on a recent health examination conducted, both animals have a regular estrus cycle, but no conception has been recorded."

And if one is not recorded soon, the beloved animal will go extinct.

In a race against time, international experts are resorting to science to try to sustain the subspecies.

A committee at the conservancy is also looking at various alternative reproduction techniques, including in vitro fertilization.

"In other countries, success has been achieved with embryo transfer in a different rhino species, thus that, as a technique, can be presupposed to be the most promising," Paul said. "However, consultations are ongoing amongst different reproductive technique experts on the way forward."

Researchers were able to save some of Sudan's genetic material in the hopes of successfully artificially inseminating one of the two females left, Elodie Sampere, a representative for Ol Pejeta, said.

"Realistically, we are looking at these animals dying in the next decade or so. But hopefully, using artificial methods of reproduction, we might be able to bring them back in the future," Paul said. "This might mean that it will happen when the current animals are already deceased, but it could happen."

It's now up to Najin and Fatu to keep the subspecies alive.

Today 75° Thunderstorms, some may be strong