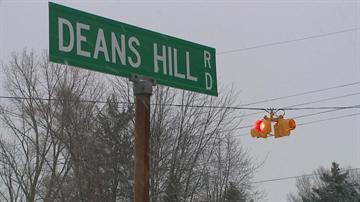 BERRIEN COUNTY, Mich. – What’s the worst road to drive on in Berrien County during a lake-effect storm?  Many would say Deans Hill Road is a likely candidate; residents sometimes call it the “road to hell” or “Dean’s Hell Road.”

“Yeah, you’ve got a couple, two or three,‘s’ curves there at Dean’s Hills,” explained Tim Knuth who has lived in Berrien Center for 11-years.  “Down there going toward Berrien Springs you have to take it slow on the downgrade, in the winter especially it’s slippery.”

Berrien County was one of the hardest hit during the winter storm that swept through Michiana for most of Thursday and Friday.  Dean’s Hill Road and Berrien Center were right at the thick of it.

“Winter so far has been really mild, it’s been mild and this is the first major snowstorm that we’ve had,” Knuth described.  “It dumped about 12 to 14-inches out here.”

As the storm wound down Friday night, Knuth and his neighbors started digging out.  He had the daunting task of shoveling out his long driveway without the help of his trusty snow blower.

“The belt broke, I got the wrong (replacement) belt that wouldn’t fit it,” he explained, panting while taking a break from shoveling.  “I’ll go back and exchange it and we’ll be in business.

One of the hazards of living so far out in the county, some residents explained, is that plows can be few and far between.  The open fields mean plowing is often useless when high winds just push plowed snow right back on the road…and back on driveways.  But, Knuth said he didn’t mind shoveling it back off.

Though driving and shoveling may be a bit “hellish” for the people living on Dean’s Hill Road, Knuth said he and his neighbors wouldn’t change a thing.

“It’s a beautiful thing to have all four seasons in the state of Michigan,” he said, smiling. “It’s cool to see winter, fall, summer and spring.”