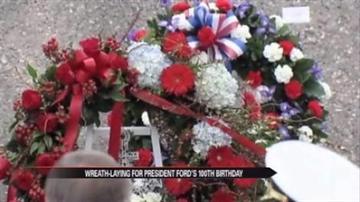 GRAND RAPIDS, Mich. -- President Gerald Ford was remembered in his hometown of Grand Rapids in honor of his 100th birthday.

Dozens gathered at Ford's tomb for a wreath-laying ceremony near his Presidential Library and museum.

During the memorial, the museum unveiled a model of the aircraft carrier, the USS Gerald R. Ford.

The President's namesake carrier is currently under construction. It is scheduled to launch later this year.