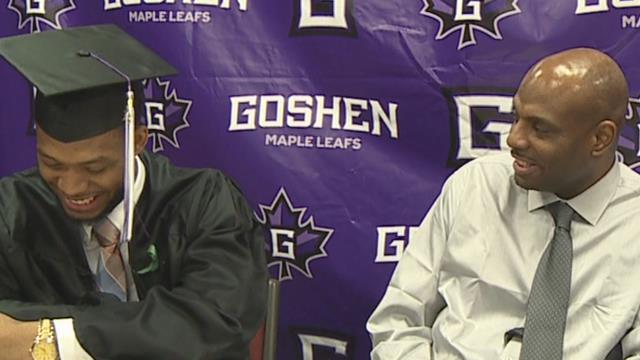 A wrongfully convicted man was released from prison just in time to see his son graduate from Goshen College.

Eddie Bolden didn’t get the opportunity to watch his son Dominique take his first steps but on Sunday he was at Goshen College to watch him walk across the stage and accept his diploma.

“I started crying before he made it to the stage,” said Eddie.

Dominique was just a year old when his father received a life sentence for a double murder he didn’t commit.

“I made sure I got to visit him a lot and just frequent phone calls every week. That’s how we built our relationship,” said Dominique.

Dominique and his brother Antonio always kept that strong relationship with their dad.

“I begged them just don’t give up on me and they always promised me that they wouldn’t and they didn’t,” said Eddie.

A retrial earlier this year proved Eddie’s innocence. On Tuesday he was released after 22 years in prison.

“There were days that I didn’t want to live. And the only thing that stopped me from giving up was knowing it would hurt you all and I thank you all for being my reason for living,” said Bolden.

While support from his sons gave Eddie hope, he inspired them too.

“Just seeing his situation and how he refused to give up and how hard that was, compared to that school was nothing so why would I give up on school,” said Dominique.