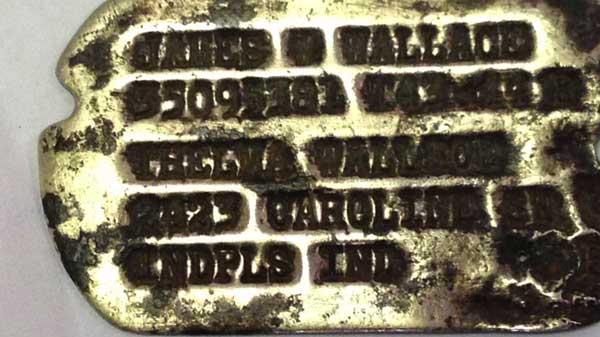 Indianapolis, IN -- A gift was given Thursday unlike any other. Catherine Wallace, 90, was given her late husband's dog tag from World War II. Her husband Jim Wallace was an army veteran from Indianapolis and stormed the beaches of Normandy, France on D-Day.

This past summer, 70 years after D-Day, Francois Blaizot pulled the tag off Utah Beach and managed to mail it back to the United States with help from a lot of Good Samaritans. The tag was presented to Ms. Wallace Thursday at her home in American Senior Communities.

"This is such a unique story and the fact that this dog tag was found X amount of years later is astounding, it really is," said Cory Goodwin, a volunteer with the Grant County Veterans Affairs Office. Goodwin helped facilitate the return when he was contacted by a man in Texas who had learned the dog tag had been found.

Two of Wallace's three children were present for the presentation Thursday. The returned dog tag came with sand from Utah Beach, and a letter from Blaizot which read in part, "Madame Wallace, it is a real pleasure to give to you back the dog tag of your husband. It is a way for me to pay tribute to the men like your husband who came in our country to restore liberty."